Primary non-Hodgkin lymphoma of the spine is very rare and occurs mostly in adults with strong male predominance. Here, we present the case of a 24-year-old girl harboring a primary diffuse B-cell lymphoma of L2 vertebral body, who was admitted in an emergency with cauda equina syndrome and completely recovered after total spondylectomy and adjuvant chemotherapy. Such findings have never been previously reported.

Primary lymphoma of bone (PLB) accounts for 2.8-5.9% of non-Hodgkin lymphomas and affects essentially adults with strong male predominance.[1] Long extremity bones such as the femur represent the most frequent locations,[2] and single vertebral involvement is observed in only 1.7% of all cases.[3] At presentation, the disease may resemble traumatic fracture or mimic inflammatory, neuropathic, or infectious conditions.[4] We present the case of a 24-year-old girl harboring a primary diffuse B-cell lymphoma of L2 (BCL-2) vertebral body, who was admitted in emergency with cauda equina syndrome and completely recovered after total spondylectomy and adjuvant chemotherapy.

A 24-year-old girl presented to our emergencies in January 2014 for 2 months’ history of severe back pain recently aggravated to incapacity of walking and sphincter disturbances for the past 3 days. Her medical history was consistent for neither prior pathologies nor prior trauma.

On admission, a physical examination disclosed flaccid paraplegia, with very weak tendon reflexes in both sides and T12 sensory level. Bladder retention was also present. Lymphadenopathy, mass, and organomegaly were not detected, and blood analyses were also normal. 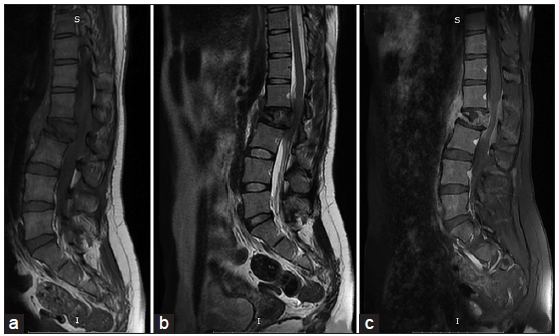 Surgery was advised in emergency, and a two-stage complete spondylectomy was decided starting with a posterior decompressive approach, and following by a lateral lobotomy approach for the removal of the vertebral body. Stability was ensured by costal rib grafts and posterior spinal instrumentation [Figure 2].

During the surgery, the tumor was grayish and moderately hemorrhagic. L2 posterior arch and the surrounding soft tissues were macroscopically intact.

Pathologic examination made on multiple tissue samples showed infiltration by lymphocytes with relatively large and irregular shaped nuclei [Figure 3]. Immunohistochemical staining was positive for CD79a, CD20, CD45, CD45RO, PCNA, BCL-2, and Vimentin, and negative for CD3, CD30, and CD99, which is typical of a B-cell non-Hodgkin lymphoma. 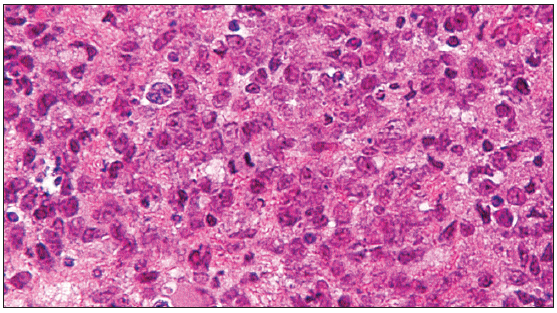 Figure 3. Photomicrograph of the tumor specimen showing typical characteristic of large B-cell lymphoma with a highly cellular tumor composed of large cells with abundant cytoplasm and large round ovoid nucleoli

Laboratory tests including complete blood count with examination of a peripheral smear, chemistries to assess renal and hepatic function, measurement of serum glucose, calcium, albumin, lactate dehydrogenase, beta2-microglobulin as well as serum protein electrophoresis and HIV serology were realized and all these results were normal. Chest X-ray, computed tomography (CT) scan of the thorax, abdomen, and pelvis and MRI on the whole neuraxes showed no other sites of lymphoma and the final diagnosis was a primary diffuse BCL-2 vertebral body. Adjuvant LMB-89 chemotherapy treatment was started.

Clinically, the patient was enrolled under an intensive care and rehabilitation program. Her condition remarkably improved and complete recovery was reached within 2 weeks postoperatively. She is symptom-free with no clinical or radiological signs of progression at the most recent follow-up examination, 8 months after surgery.

Primary lymphoma of bone was first described as a distinct clinicopathological entity by Parker and Jackson in 1939.[2] Coley et al.[5] in 1950, presented clear diagnostic criteria for PLB: the tumor should primarily focus in one single bone, having a positive histological diagnosis with no evidence of distant soft tissue or distant lymph node involvement. Recently, the WHO classification also recognized multiple bone involvement as a primary bone lymphoma if visceral or lymph node involvement does not exist.[6]

Primary lymphoma of bone represents a rare clinical entity mostly affecting adult male patients. It is histologically dominated by diffuse large BCL (90% of all cases) and extremity bones such as the femur, tibia or ulna, represent the most common locations.[2]

The spine is an unusual location, and unique vertebral involvement is exceedingly scarce representing less than 1.7% of all PLB cases.[3]

The duration of symptoms prior to presentation depends on the aggressiveness of the lesion. Complaints at presentation include mainly night-pain, swelling, mass, fever, weight loss, limp, irritability, and pathological fracture. Neurological signs are rarely seen and often manifest late in the course of the disease.[2]

In the present case, a previously healthy, 24-year-old girl presented with cauda equina syndrome which is an unusual pattern of presentation, supporting the widely held idea about the unspecific shape of PLB.

Radiologically, PLB has many similarities with metastatic disease although a few differences exists such as patchy sclerosis on CT or bone marrow invasion without a soft tissue mass due to the infiltrative nature of lymphoma on MRI.[7]

Positron emission tomography can be of important adjunct in detecting multiple or silent lesions, with the tumor appearing as areas of intense hypermetabolic activity.[8]

In the present case, plain radiograph and emergency MRI were of little help for diagnostic orientation as tumor features were unspecific. Our attitude was consequently more hampered by the emergency than by the tumor nature or radiological features.

It seems clear that the therapy for PLB is still a cause of debate. Its rarity and the associated pathologic heterogeneity do certainly contribute to the lack of clear management guidelines. Several studies suggested that the combination of chemotherapy and radiotherapy was the best treatment option for patients harboring PBL.[9,10] In fact, Beal et al.[11] eloquently discussed the treatment results and prognostic factors for PLB, and found that the combined approach offers significantly better survival than chemotherapy or radiotherapy administered alone. The place of the surgery in the treatment options remains to be defined. Till now, it has been suggested in case of pathologic fractures, avascular necrosis, spinal cord compression, or the stability compromise.

In the present case, surgery was advised in emergency starting by decompressive laminectomy. Based on the patient age and tumor characteristics, we opted for a total spondylectomy approach and consequently removed L2 vertebral body.

Solitary diffuse large BCL has commonly a favorable prognosis compared to many other malignancies. Spontaneous regression has already been reported and the 5-year event-free survival reaches 75-100%.[1] But good results are tempered by other dismal progressions like death within 1-year postoperatively following combined therapy.

Age and the presence of immunoblasts represent the most important prognostic factors and were correlated with significantly poorer prognosis.[12]

For the present case, we believe that our preferential radical surgical approach in association with adjuvant chemotherapy can result in better tumor control and longer disease-free survival for this young patient. Radiotherapy under these considerations will be better administered in case of recurrent disease since its administration will not be possible without irradiating an already suffering conus medullaris.

Finally, lessons must be drawn from the present case and future challenges should be taken into consideration: primary diffuse BCL can localize in the lumbar spine of young female patients and manifest with cauda equina syndrome; radical surgery under these considerations can result in total recovery even after flaccid paraplegia; early identification is of paramount importance and long-term follow-up is mandatory to spot recurrences early. 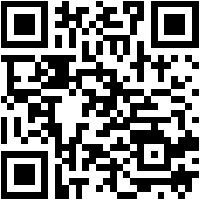