Intracranial hypertension is a common cause of morbidity in herpes simplex encephalitis (HSE). HSE is the most common form of acute viral encephalitis. Hereby we report a case of HSE in which decompressive craniectomy was performed to treat refractory intracranial hypertension. A 32-year-old male presented with headache, vomiting, fever, and focal seizures involving the right upper limb. Cerebrospinal fluid-meningoencephalitic profile was positive for herpes simplex. Magnetic resonance image of the brain showed swollen and edematous right temporal lobe with increased signal in gray matter and subcortical white matter with loss of gray, white differentiation in T2-weighted sequences. Decompressive craniectomy was performed in view of refractory intracranial hypertension. Decompressive surgery for HSE with refractory hypertension can positively affect patient survival, with good outcomes in terms of cognitive functions.

Herpes simplex encephalitis (HSE) is the most common form of acute viral encephalitis.[1] HSE is caused by herpes simplex virus types 1 and 2 (HSV-1 and HSV-2), two DNA viruses of the Herpesviridae family. HSV is the most frequent agent of sporadic fatal encephalitis with an annual incidence of 1 in 250,000-500,000.[2] Untreated HSE has an extremely high mortality rate of 70%.[3] Early diagnosis and treatment can reduce the mortality rate to 19%.[4,5] Morbidity in HSE is mainly due to intracranial hypertension.[4] Therefore, we report a rare case of HSE, which required decompressive craniectomy to treat severe refractory intracranial hypertension.

Patients with HSE usually present with headache, confusion, fever, and seizures.[6] Failure to diagnose this serious disease early may result in permanent disability or death. The presence of clinical symptoms and a localized lesion in the temporal lobe usually reflects HSE, but other diseases can also mimic this condition.[7] Cerebrospinal fluid (CSF) examination is indicated for suspected HSE patients even if the intracranial pressure is increased.[7]

Herpes simplex virus usually causes a mild disease restricted to the skin and mucosa. Much less commonly, it causes severe encephalitis. While HSV-1 is typically transmitted via the oro-labial route, HSV-2 is transmitted venereally. HSV-1 strains are etiological agents in over 90% of cases of HSE. HSV-2 strains are more commonly isolated in congenitally acquired neonatal HSV meningoencephalitis. After initial replication in skin and mucosa, the HSV-1 virus infects the sensory nerve endings innervating the infected territory and migrates along retrograde axonal flow toward the trigeminal ganglia where it remains latent.

The mechanisms whereby HSV-1 penetrates the nervous system, evades the immune response and causes encephalitis are incompletely understood. HSV could enter into the brain by reactivation of the viral genome in the trigeminal ganglion with axonal spread via the trigeminal nerve into the temporal and frontal lobes. Furthermore, HSV-1 can primarily infect the central nervous system.

A 32-year-old male presented with headache, vomiting, fever, and focal seizures involving the right upper limb of 1-week duration. There was no significant past history. There was no history suggestive of any immunodeficiency. On examination, the patient was hemodynamically stable and conscious but febrile and irritable. He had no focal neurological deficits but had signs of meningeal irritation. The pupils were equal in size and reactive. Magnetic resonance imaging of brain (MRI-brain) [Figure 1] showed swollen and edematous right temporal lobe (a) with increased signal in gray matter and subcortical white matter with loss of gray white differentiation in T2-weighted sequences. There was a signal change in the right insula and sub frontal cortex bilaterally. Restricted diffusion and abnormal leptomeningeal enhancement were also noted. There was mass effect with partial effacement of the body of the right lateral ventricle and midline shift (b). A guarded lumbar puncture was done and CSF study [Table 1] showed protein: 60 mg/dL, sugar: 87 mg/dL, and 200 cells/mm3 with lymphocytic pleocytosis. CSF meningoencephalitic profile was positive for herpes simplex 1 virus. 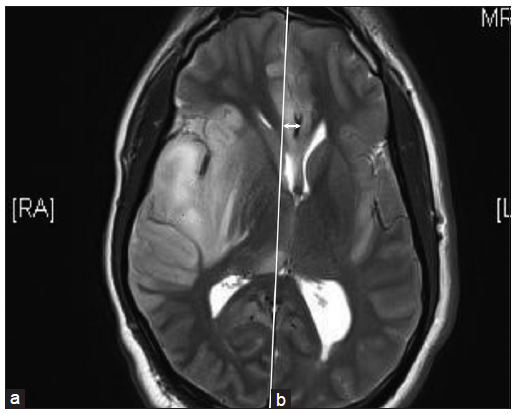 Figure 1. Magnetic resonance imaging of brain: T2‑weighted sequence showing swollen and edematous right temporal lobe (a) with mass effect (b) and midline shift as indicated by the arrow

Cerebrospinal fluid meningoencephalitis profile [Table 1] is a polymerase chain reaction (PCR) equivalent. This is a molecular diagnostic screening technology involving isolation of the genetic material of the causative agent from the given specimen and simultaneous amplification of the “syndrome specific signature genes” of all the probable causative agents, followed by “syndrome specific hybridization”.

Based on a presumptive diagnosis of HSE, the patient was started on intravenous acyclovir (500 mg 8th hourly). He was also started on anti-cerebral edema medications, intravenous 20% mannitol 150 mL 6th hourly, and steroids (dexamethasone) 8 mg 8th hourly. His sensorium deteriorated soon after admission, being unresponsive (Glasgow coma scale: 5/15) (eye response 1, verbal response 1, motor response 3) and the right pupil dilated. The patient was emergently intubated and connected to ventilator. Since the patient was already on full-fledged anti-cerebral edema medications, surgical options were then considered as the second measure. A decompressive surgery was immediately performed by a large right frontotemporoparietal craniectomy. The dura was widely opened and lesional tissue of the right temporal was harvested for biopsy. No parenchymal resection was necessary since the brain was adequately decompressed. Dura was closed with an expansive duroplasty. The bone flap was not replaced; instead was preserved in the anterior abdominal wall. Anti-cerebral edema medications were tapered and stopped postoperatively. 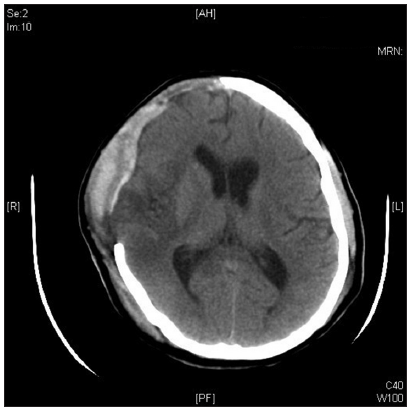 Figure 2. Postoperative computed tomography of brain after 3 days showing resolution of the mass effect with no midline shift

Electroencephalography (EEG) in the postoperative period showed diffuse right hemispherical slowing in theta to delta range [Figure 3]. Histopathology of the right temporal lesion [Table 2] revealed infiltration by inflammatory cells and perivascular lymphocytic cuffing [Figure 4] with occasional multinucleated giant cells, consistent with the well-known pathology of HSE. The patient was discharged on the 10th postoperative day in a recovering condition.

Histopathology of the right temporal lesion 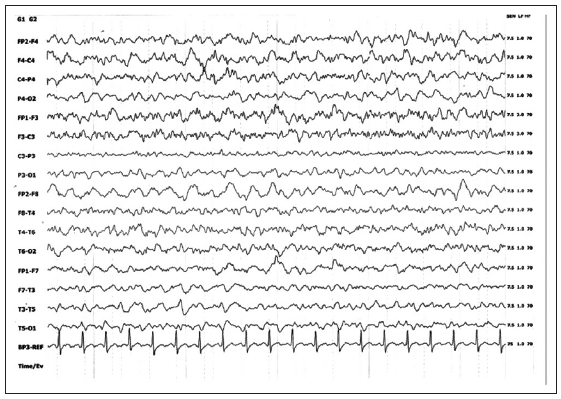 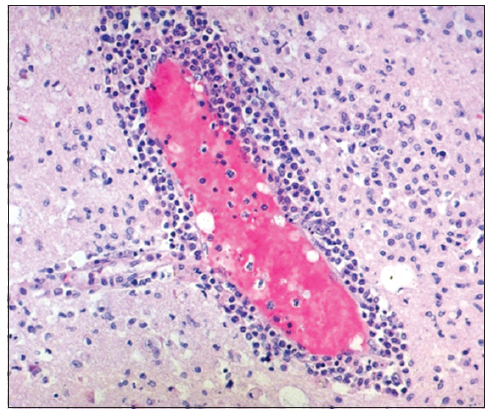 Figure 4. Histopathology of the right temporal lesion showing infiltration by inflammatory cells and perivascular lymphocytic cuffing, which is consistent with herpes simplex encephalitis

Over the next few months, the patient made a remarkable neurological recovery. He regained full consciousness and normal cognition. He did not have further episodes of seizures. He has no residual neurological deficits. Two months after the craniectomy, the bone flap was replaced.

In HSE, delay in treatment leads to severe neurological sequelae. Therefore, early diagnosis is of great importance. Diagnostic criteria include clinical symptoms, MRI, EEG, and CSF studies [Table 3]. The sensitivity is increased with the combination of these neurodiagnostic tests.[12] When HSE is suspected, MRI brain should be done as early as possible as signs of HSE could be detected by MRI earlier than CT scan.[13] Because MRI is a more sensitive and specific diagnostic tool, it is used instead of CT scans in the majority of patients.[13-15] The characteristic MRI finding of HSE is hyperintense areas (T2-weighted sequences) in the inferior part of temporal lobes, medial part, and insula. This may also be observed in the frontal and parietal lobes. Bilateral temporal lobe involvement has been reported to be pathognomonic of HSE.[16] Diffusion limitation observed in T2-FLAIR sequences are also thought to be typical.[16]

Diagnostic criteria for HSE. HSE is diagnosed in a febrile patient with an altered level of consciousness *in the presence of any 3 of the following diagnostic tests

Herpes simplex encephalitis is a medical emergency that requires prompt diagnosis and therapy. However, both are often delayed for several reasons. For instance, the clinical presentation itself is non-specific and may be mistaken for stroke, epilepsy, delirium or a primary psychiatric disorder. CSF cell count is normal in 5-10% of patients. Neuroimaging may be normal in the early stages. DNA detection may be negative.[17]

Untreated HSE is progressive and often fatal in 7-14 days. A landmark study by Whitley et al.[18] in 1977 revealed a 70% mortality in untreated patients and severe neurologic deficits in most of the survivors. Mortality in patients treated with acyclovir was 19% in the trials that established its superiority to vidarabine. Subsequent trials reported lower mortalities (6-11%), perhaps because they included patients who were diagnosed by PCR rather than brain biopsy and who thus may have been identified earlier with milder cases of HSE.[19]

Sequelae among survivors are significant and depend on the patient’s age and neurologic status at the time of diagnosis. Patients who are comatose at diagnosis have a poor prognosis regardless of their age. In non-comatose patients, the prognosis is age related, with better outcomes occurring in patients younger than 30 years. Anterograde memory often is impaired even with successful treatment of HSE. Retrograde memory, executive function, and language ability may also be impaired. A study by Utley et al.[20] showed that patients who had a shorter delay (< 5 days) between presentation and treatment had better cognitive outcomes. Furthermore, Marschitz et al.[21] reported a case of chorea after HSE.

Despite adequate medical treatment, some HSE patients worsen because of refractory intracranial hypertension. A decompressive craniectomy (in which the skull flap is not immediately replaced, allowing the brain to swell, thus reducing intracranial pressure), with or without anterior temporal lobe resection, can be effective in controlling intractable, elevated intracranial pressure in HSE.[22,23]

Taferner et al.[24] reported the long-term sequelae (1.5-8 years after craniectomy) of four cases with HSE and confirmed its appropriateness, as it led to full cognitive recovery, resocialization, and reintegration into professional life. Ebel et al.[25] suggested that not only a decompressive craniectomy, but also a partial resection of the temporal lobe may be of benefit for patients with tentorial herniation, because both decompression and reduction of infectious material with cystic tissue necrosis can be achieved. Moreover, the initial neurologic deficit does not affect the long-term clinical outcome if decompression is done in the early stages.[26]

In conclusion, we were able to diagnose HSE with the help of clinical findings, MRI-brain, analysis of CSF profile showing lymphocytic pleocytosis and detection of HSV DNA, in our patient [Table 4]. EEG showed diffuse right hemispherical slowing in theta to delta range and brain biopsy was consistent with HSE. Initially, the patient was initiated on empirical acyclovir therapy and anti-cerebral edema medications but later on decompressive craniectomy was necessary to treat refractory intracranial hypertension. Following surgery the patient showed remarkable neurological recovery. Hence, we conclude that, for patients with HSE, it is important for the clinician to detect deterioration of consciousness because of the mass effect caused by the disease-associated inflammatory process as early as possible. Timely recognition of refractory intracranial hypertension and surgical decompression in HSE can be life-saving. Increased intracranial pressure during HSE may be so grave that it may cause a shift of intra-cerebral structures, thus increasing the morbidity and mortality. Decompressive surgery for HSE with refractory hypertension can positively affect patient survival, with good outcomes in terms of neurological recovery.

Diagnosis of HSE in the present case