Multiple sclerosis (MS) is an immune-mediated inflammatory and neurodegenerative disease of the central nervous system. Interferon (IFN) beta is an active ingredient of five out of twelve disease modifying treatments approved for MS. We report a case of IFN-beta-induced cardiac arrhythmia with premature ventricular contractures in a patient recently diagnosed with MS.

Multiple sclerosis (MS) is an immune-mediated inflammatory and neurodegenerative disease of the central nervous system.[1,2] There is no cure for MS. Most MS patients are being treated with disease modifying treatments (DMTs). Selected DMTs can cause cardiovascular adverse events in MS patients. Due to a risk for bradyarrhythmia and atrioventricular blocks, patients should be monitored during fingolimod treatment initiation.[3] Interferon (IFN) beta is an active ingredient of five out of twelve DMTs approved for relapsing-remitting form of MS. We are reporting a case of IFN-beta-1a-induced cardiac arrhythmia with premature ventricular contractures (PVCs) in a patient recently diagnosed with MS.

The patient is a 22-year-old female without any previous history of cardiac disease. In 2002, she developed her first neurological episode of decreased sensation in the right upper and lower extremities. The symptoms subsided after a 5-day course of intravenous steroids.

In June 2008, the patient developed vertigo, dysarthria, ataxia in the right hand and right hemiparesis. Her brain magnetic resonance imaging (MRI) revealed numerous ovoid lesions adjacent to lateral ventricles and a T2 hyperintense lesion adjacent to the fourth ventricle involving the right middle cerebellar peduncle. Several of these white matter lesions were contrast-enhancing. On her cervical and thoracic spine MRI, there were two separate contrast-enhancing lesions at C4 and C5-C6 level on the right side. The patient improved symptomatically after a course of intravenous steroids and was diagnosed with clinically definite relapsing-remitting MS in 2008 based on McDonalds criteria.[4] She was initially started on Glatiramer acetate (20 mg subcutaneously daily) in August 2008. However, she had experienced two MS exacerbations (left optic neuritis and myelitis) within 7 months after starting this medication. MRI done in March 2009 revealed new contrast-enhancing lesions in the cervical spine. Therefore, Glatiramer acetate was discontinued on March 19, 2009 due to the lack of clinical efficacy. She did not take any medication between March 19 and April 7. The patient agreed to try IFN-beta-1a 3 times a week and received her first subcutaneous injection of medication (11 μg, or 25% of the full dose) on April 7, 2009. Three hours after injection, she started to feel irregular heartbeats. An electrocardiogram (ECG) performed on April 8, 2009 revealed PVCs with the heart rate 72 beats/min [Figure 1]. IFN-beta was discontinued. The patient was followed clinically; her symptoms of irregular heartbeats disappeared in 4 days after IFN-beta-1a injection. The repeat ECG on April 14, 2009 revealed normal sinus rhythm [Figure 2]. The patient was evaluated by a cardiologist. It was concluded that cardiac arrhythmia with PVCs was secondary to IFN-beta-1a treatment. The patient was switched to another (non-IFN-based) DMT for MS and has had no cardiac symptoms in the subsequent 5 years. 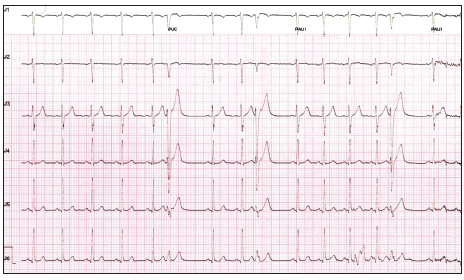 Figure 1. Electrocardiogram depicts a rhythm strip recorded from leads V1-V6 (10 s) with three premature ventricular contractures (PVCs). The heart rate was 72 beats/min. The study was performed on April 8, 2009. This EKG was done on the next day after a single IFN-beta-1a injection (11 µg SC). Two additional rhythm strips (10 s each) revealed 5 more PVCs (not shown)

We describe cardiac arrhythmia with PVCs in a 22-year-old MS patient who received her first dose of IFN-beta-1a. The medication had been in her system for 3 h by the time the patient started experiencing palpitations, and it took 4 days for symptoms to resolve. The pharmacokinetics of Rebif® (IFN-beta-1a) in people with MS has not been evaluated. In healthy volunteer subjects, a single subcutaneous injection of 60 μg of Rebif®, resulted in a peak serum concentration of IFN-beta in approximately 16 h. The mean serum elimination half-life was 69 h.[5] There were no previously described cases of early onset cardiac arrhythmia in IFN-beta-treated patients. Kastalli et al.[6] reported a case of cardiac arrhythmia in a 35-year-old MS patient who was diagnosed with complete left bundle branch block after 5 years of IFN-beta-1a treatment. In contrast to IFN-beta, other Type I IFNs such as IFN-alpha subtypes are well-known for causing cardiac arrhythmia, dilated cardiomyopathy, and symptoms of ischemic heart disease, including myocardial infarction and sudden death.[7] Ectopic beats, including PVCs were reported in patients treated with IFN-alpha-2b.[8] Cardiotoxic side-effects in patients treated with IFN-alpha, usually, manifested within 4-12 weeks of therapy, but in some cases they could occur within 1-7 days of initiating the drug treatment.[7,9] In most of the cases lowering the dose of IFN-alpha or discontinuing this drug helped to reverse cardiac arrhythmia (usually in the matter of 3-7 days).[7,9]

Although the IFN-alpha subtypes and IFN-beta interact with a common receptor, IFN-alpha receptor (IFNAR), which comprises high-affinity (IFNAR2) and low-affinity (IFNAR1) components, they nevertheless exhibit functional differences.[10] One may suggest that difference in ligand-receptor affinity is one of the possible explanations for these variations. Even within the IFN-alpha species, individual subtypes may differ by over 10,000 fold in their biological activity.[11] Recently, it was shown that IFN-beta binds to IFNAR1 independently of IFNAR2.[12] Therefore, it is not surprising that the induction of cardiac arrhythmia may be less frequent in IFN-beta-treated compared with IFN-alpha-treated patients. However, more studies need to be done to understand the cause and prevalence of cardiac arrhythmia symptoms in IFN-beta- and IFN-alpha-treated patients. Nevertheless, as IFN-beta is one of the most prescribed DMT for MS, the knowledge about this adverse effect is deemed to be important for neurologists treating MS patients.

We would like to thank Joan Moore for technical support.