Fibromuscular dysplasia (FMD) is a non-inflammatory, non-atherosclerotic, and multifocal vascular disease, commonly involving the cerebral and renal arteries. Cerebrovascular stenosis and spontaneous dissection resulting from cerebrovascular FMD (cFMD) is one of the important causes of young stroke. Here we reported the case of cFMD in a 28-year-old male patient with stroke. Digital subtraction angiogram demonstrated dissecting aneurysm in the carotid artery and multiple stenoses in both vertebral arteries. Endovascular angioplasty with balloon predilation and stenting was successfully performed for the patient, when medical treatment is not adequate. The follow-up showed remarkable improvement and no recurrence of stroke.

Fibromuscular dysplasia (FMD) is an uncommon vascular disease that occurs more often in young women. FMD mainly involves the renal and cerebral arteries.[1] Cerebrovascular FMD (cFMD) can be complicated by stroke and associated with headaches, and it can also be associated with intracranial aneurysms with a high risk of subarachnoid hemorrhage. The cerebrovascular stenosis and dissection, as a result of FMD, is one of the important causes of stroke in the young (15-45 years old). A case report of cFMD treated with angioplasty and stenting in a young male patient is presented, along with an overview of the available literature.

A 28-year-old male patient was admitted to our stroke unit ward of department of neurology in the Second Affiliated Hospital of Soochow University because of ischemic stroke with inarticulate speech and paralysis of right limbs. The patient had no medical history of traditional cerebrovascular risk factors, such as hypertension. The patient also had no personal or family history of stroke. The dysphasia and slight right-sided weakness occurred without definite causes one day before admission without any prior warning. Magnetic resonance imaging revealed a new infarction lesion on the left temporal lobe and occlusion of the left internal carotid artery (ICA). The ultrasound sonography also demonstrated occlusion in the left ICA. Antiplatelet (clopidogrel 75 mg and aspirin 100 mg q.d. p.o.) and statin therapy (atorvastatin 40mg q.n. p.o.) were given to this patient diagnosed as acute cerebral infarction without a clear etiology. During this hospitalization for seven days, logaphasia and more severe paralysis of the right limbs occurred. Then, he was transferred to our stroke unit ward for further vascular evaluation and interventional therapy. The positive neurological signs were as follows: incomplete logaphasia, central facial paralysis, right-sided hemiparesis (4/5) and positive Babinski sign. Other laboratory tests about thyroid function, autoimmune antibodies and vasculitis indicators were all normal.

Digital subtraction angiography (DSA) showed a dissecting aneurysm of the C1 segment of right ICA and subtotal occlusion of the left ICA [Figure 1a and b]. Anterior communicating artery was open, and the left middle cerebral artery (MCA) territory got collateral blood flow from the right MCA [Figure 1c]. Severe bilateral stenosis (> 70%) was also revealed on the V2 segment of both vertebral arteries (VA) [Figure 1d-f]. Then angioplasty and stenting was performed for this young patient. 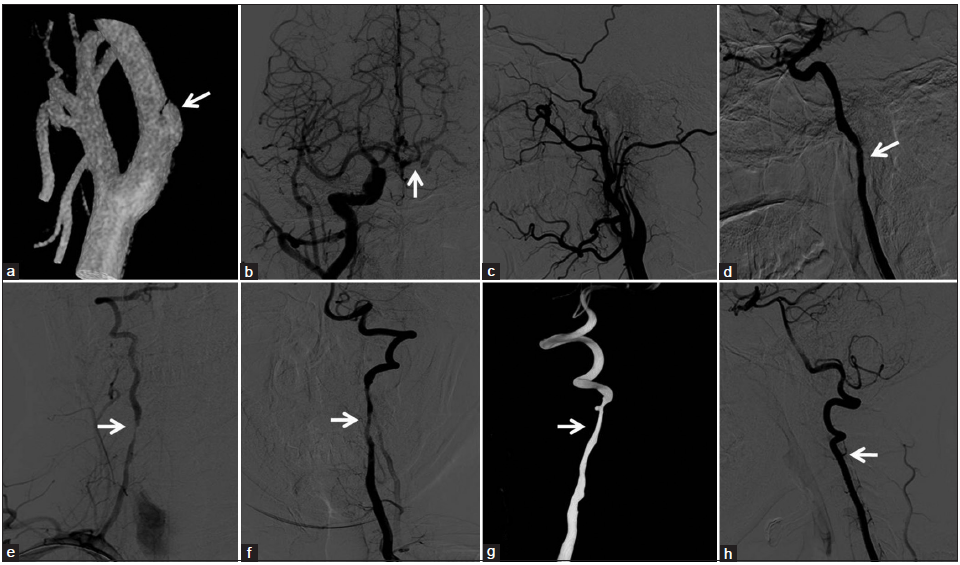 First, the vertebral angioplasty and stenting was performed and then the left ICA was stented because of the carotid sinus reaction. A dissecting stenosis on the initial segment of the left VA stenosis was found during the angiography before stenting. Firstly, one expanding stent was placed on the dissecting site and then another two stents (4 mm × 60 mm and 4 mm × 40 mm) were delivered and deployed to cover the long stenotic lesion. A final angiography demonstrated excellent stent placement across the stenotic lesion of the left VA and left vertebral angiogram revealed good flow in vertebral and basilar arteries [Figure 1g].

After advancing the 8F guiding catheter within the C1 segment of the left ICA, a microwire (0.014 inches) was delivered through the subtotal occlusive site and predilation was performed with a balloon (2.5 mm × 15 mm) at 6 atm. Then the stent (4 mm × 40mm Xpert Stent System) was deployed over the stenosis and post-dilation was performed with a balloon at 6 atm. Angiography after stenting showed revascularization of the subtotal stenosis and good flow across the stent with complete disappearance of this stenosis [Figure 1h]. After the procedure, antiplatelet therapy (clopidogrel 75 mg and aspirin 100 mg daily) was sequentially administered for 3 months, and then aspirin is taken prophylactically. During the follow-up period of three years, this patient was normal at three months after discharged from our hospital, and no recurrent stroke occurred.

FMD is a non-inflammatory, non-atherosclerotic vascular disease that commonly involves the renal and internal carotid arteries. The young patient has multiple vascular stenoses, but no cerebrovascular risk factors, therefore cFMD can be diagnosed. The prevalence of symptomatic renal artery FMD is about four in 1000 and the prevalence of cFMD is probably half that.[1-4] FMD usually affects females from 15 to 50 years of age and accounts for around 10% of cases of renal artery stenosis.[1-4]

Although the etiology of FMD is not well understood, several mechanisms have been proposed. For example, genetic predisposition, hormonal factors and arterial wall ischemia.[1,4] The pathogenesis of FMD remains unclear. A number of theories have been proposed, including environmental factors, such as smoking and estrogen, as well as genetic factors; however, about 10% of patients with FMD have an affected family member.[5]

cFMD may be asymptomatic or associated with a variety of nonspecific symptoms, including headache, tinnitus, vertigo, lightheadedness and syncope.[1] The clinical manifestations of cFMD are variable and depend on a number of factors, including the distribution of vascular bed involvement and the type and severity of the vascular lesions.[6,7] The more specific neurologic syndromes of TIA, amaurosis fugax, stroke, Horner’s syndrome, and cranial-nerve palsies may be the first presentation of FMD involving the carotid or VA.[8] And the most feared and serious sequelae of cFMD include TIA, stroke, subarachnoid hemorrhage and cervical artery dissection. It shows that FMD is present in about 15%-20% of patients with a spontaneous dissection of carotid or VA.[9] And multiple cervical artery dissections are more common in patients with an underlying arteriopathy, such as FMD.[10]

Non-invasive imaging modalities for diagnosing FMD include Doppler ultrasound, computed tomographic angiography and magnetic resonance angiography. The accepted gold standard for the diagnosis of cFMD is DSA. "String of beads pattern" in the pathological carotid or renal arteries is an important and most common angiographic finding and is present in over 90% of cases. However, it was not observed in this present case. This invasive test should be considered for those symptomatic patients in whom intervention is contemplated or for cases in which there is uncertainty about the patient’s diagnosis or severity of disease.[11]

Medical therapy and revascularization are the two major treatment options for cFMD patients. As previously discussed, antiplatelet therapy is the mainstay of the medical therapy. For symptomatic patients with carotid or vertebral artery FMD who have suffered a dissection, angioplasty with stenting may be performed. The indications for intervening in cFMD are for those in whom antiplatelet or anticoagulant therapy is contraindicated or less effective and for those cFMD patients with pseudoaneurysm formation, usually the result of a prior dissection.[12]

This study was supported by the National Natural Science Foundation of China (Grant No. 81471195) and the second affiliated hospital of Soochow university preponderant clinic discipline group project funding (Grant No. XKQ2015002). 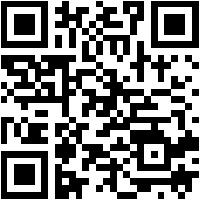