SIH cases occasionally present with concomitant subdural effusions and, more rarely, cerebral venous thrombosis (CVT) (2% of patients).[3] The most characteristic brain MRI finding in SIH is diffuse pachymeningeal enhancement, that is caused by an increase in venous blood volume secondary to the loss of CSF pressure.[4] This alteration can lead to subdural hematoma and CVT through two main mechanisms: (1) SIH is associated with rostrocaudal sagging of the brain due to the loss of CSF buoyancy,[4] resulting in a negative intracranial pressure gradient that may damage the venous endothelial lining by stretching the cerebral vessels, and can produce tears in bridging veins in the dural border cell layer, causing them to rupture and leading to subdural hematoma; (2) the loss of CSF volume reduces absorption of CSF into the cerebral venous sinuses, resulting in increased blood viscosity in the venous compartment,[5] which could contribute to dural sinus thrombosis in patients with risk factors for thrombosis. The general consensus is that CVT should be treated with heparin, since a meta-analysis concluded that this treatment is safe and is associated with a clinical trend (not statistically significant) of reduction in the risk of death and dependency. Thus, most of the reported SIH patients with CVT have been treated with anticoagulation so far along with bed rest, hydration and epidural blood patches (EBP) [Table 2].[6-14] On the other hand, cases of large subdural hemorrhage require surgical drainage and treatment of the underlying cause of SIH. Most SIH patients without other complications recover after bed rest with foot end elevation, hydration and steroid therapy. Nevertheless, the mainstay of SIH treatment is the application of EBP at the CSF-leak site (injection of 10-20 mL of autologous blood into the spinal epidural space).[15] Relief of symptoms, particularly orthostatic headache, is often dramatic after EBP, and if it fails it can be repeated. On the other hand, direct EBP at the cervical area is challenging due to the narrow space of region and its proximity to important neural structures, therefore, this treatment is not performed in all cervical-leak cases. With this case report we aimed to provide further evidence that EBP is a feasible and efficient treatment for SIH with CSF leak in the cervical area, subdural hematoma and CVT.

A 48 years old Indian male presented with headache and neck pain of 1 month duration. The patient had severe occipital headache with visual analogue score of 9. The headache worsened in the upright position and was completely relieved after lying down. The patient was otherwise normal, without any significant past clinical history.

On examination, the patient was conscious, oriented and afebrile, with a pulse rate of 82 beats per minute and blood pressure of 130/80 mmHg. Eye movements were normal in all directions and there was no sign of nystagmus. Both pupils were equal and reactive to light. Cranial nerve and fundus examinations were also normal and no motor weakness or sensory loss was present. Flexor plantar response was positive and bilateral. No signs of meningeal irritation nor focal neurological deficits were found. 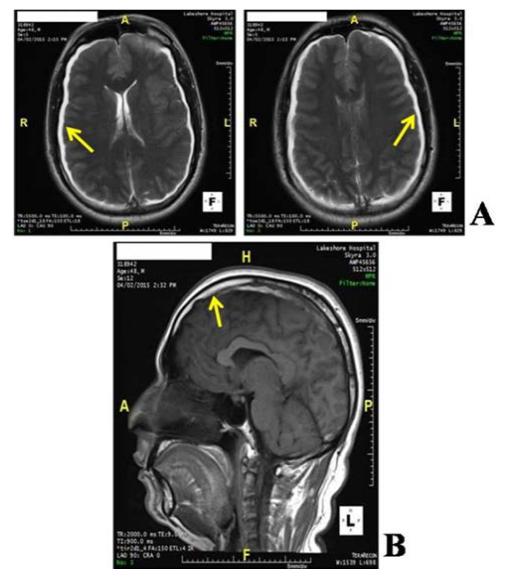 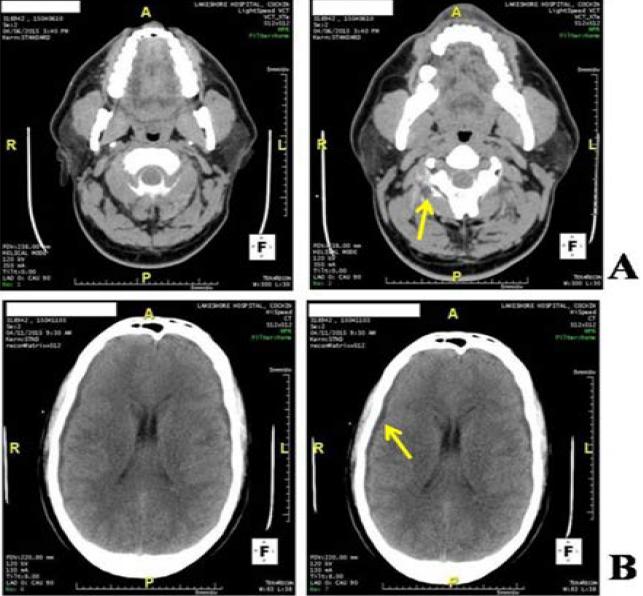 The patient was advised complete bed rest with foot end elevation and to remain adequately hydrated. Anticoagulation for CVT was precluded since he had bilateral subdural effusions and CVT was secondary to SIH. After 24 h of bed rest and adequate hydration, since the patient was very much symptomatic, a cervical autologous epidural blood patch with 10 mL of blood was performed under CT guidance and achieved the resolution of the symptoms within a week without worsening the CVT. Brain CT taken on day 5 following epidural blood patch showed mild reduction in the extent of subdural effusions [Figure 3B]. In addition, the patient showed no residual symptoms or recurrence at six-month follow-up.

Literature clearly defines clinical signs, typical MRI findings and treatment options of SIH.[3] In an intact cranium, the total intracranial volume must be constant according to the Monroe-Kellie hypothesis.[4] SIH usually occurs due to spontaneous CSF leaks in the inferior cervical and superior thoracic spine. Mechanical stress, meningeal diverticula and connective tissue diseases have been reported as the potential risk factors for the development of SIH.

The Monroe-Kellie hypothesis states that the decrease in intracranial blood volume is compensated by the dilatation of the cerebral veins.[4] Furthermore, CSF loss reduces the CSF absorption into the cerebral venous sinuses leading to an increase in blood viscosity in the cerebral compartment.

In our patient, epidural blood patch was performed earlier within 24 h of conservative therapy since the patient was very much symptomatic and SIH was complicated with subdural effusions and CVT.

In 2015, Kapoor and Ahmed did a comprehensive electronic literature search to include studies that reported on performance of cervical EBPs in patients with CSF leak at the cervical level.[16] Their review provides Class II level of evidence that cervical EBPs are safe and effective in reliving positional headache due to CSF leak. A total of 15 studies, reporting on 19 patients were included. All patients presented with a headache that increased in the standing position, and improved in the supine position. All patients were identified to have a CSF leak at the cervical level. Eight patients first underwent a lumbar EBP, without complete, long-term relief. All these patients, along with 11 patients who did not undergo a lumbar EBP prior to cervical EBP, reported complete, long-term pain relief. EBPs were mostly done in the prone position, using imaging guidance. An average of 5-8 mL of autologous blood was injected in the epidural space. No major neurological complications were reported in any patient.

Again in 2015, Wang E and Wang D reported a case of successful treatment of a patient with spontaneous intracranial hypotension correlated with MRI finding of cerebrospinal fluid (CSF) leak with extradural collection at the upper cervical spinal level.[17] This patient received two lumbar epidural blood patches without lasting relief. Later on, the radiographic evidence of prominent CSF leak with extradural fluid collection was noted at C1-2 level. The patient was then treated with a cervical epidural blood patch, which provided headache pain relief lasting 6 months. A second cervical epidural blood patch was performed, and the patient was headache free since then.

Table 2 shows all the reported data of patients with cerebral venous thrombosis and spontaneous intracranial hypotension in whom the site of cerebrospinal fluid leak was demonstrated. All these patients who received EBP responded very well and was symptom free during the follow up.

All the reported data of patients with cerebral venous thrombosis and spontaneous intracranial hypotension in whom the site of cerebrospinal fluid leak was demonstrated.

There remain some controversies in treatment of SIH complicated with CVT. Primary conservative management of SIH accompanied by anticoagulation for CVT is usually advised. If the symptoms of SIH persist even after bed rest and adequate hydration, epidural blood patching could be considered. Anticoagulation for CVT can be withheld till the symptoms of SIH get controlled. The mortality of CVT is 5% but with SIH, it can be increased. Therefore firstly SIH should be treated.

In 2013, Güler et al.[18] reported a case of cerebral venous thrombosis accompanying with intracranial hypotension. They advocated anticoagulation for this patient only after SIH symptoms resolved. CVT is not reported in any SIH case after the resolution of symptoms. So, in our patient we tried to treat the primary cause, SIH and hence anticoagulation was precluded. We advocate primary treatment of the underlying spinal CSF leak, particularly when symptoms of SIH persist. In our patient, we did an autologous epidural blood patch at the site of CSF leak under CT guidance and the patient improved. In addition, the patient had no residual symptoms or recurrence at six-month follow-up. We think that our case can add additional information to the literature regarding the management of CVT in SIH. 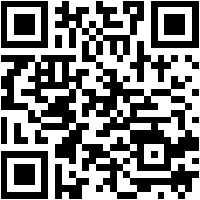