Microglia cells are antigen presenting cells with myeloid origin that constituted approximately 10% of all glial cells of the adult mouse brain.[1] In the early embryo, the microglial precursors are located in the yolk sac and progressively migrate throughout the primitive brain.[2] In the adult brain, some of microglial cells derive from the bone marrow, but this process only takes place when the brain is lesioned.[1] Microglial cells can display 4 morphological and functional stages: (1) resting microglia; (2) active microglia; (3) phagocytic microglia; and (4) senescent microglia.[3] One of the functions of microglia is to provide the cell-mediated immunity response against pathogens by releasing chemokines or cytokines.[1] However, the immune response and debris removing are not the only functions of microglial cells. Recently, it has been identified that microglia cells regulate neuronal apoptosis during the early brain development and modulate synaptic function. Strikingly, recent evidence indicates that microglia cells can regulate neurogenesis in the adult brain.

The relationship between microglia cells and the V-SVZ 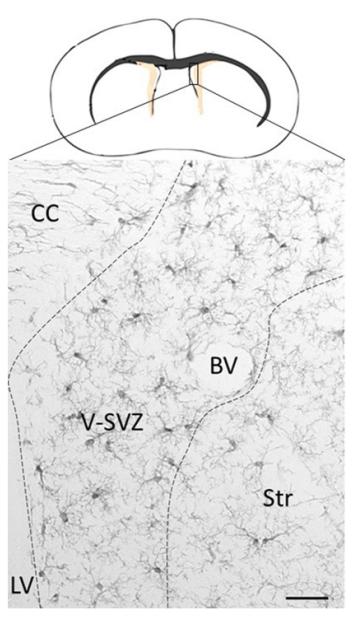 In the adult V-SVZ microglia cells stimulate neurogenesis by releasing soluble factors within the niche.[5] This is a very complex process that requires the molecular feedback between NSCs and microglia cells, which release and express a myriad of molecules, such as: CD200, vascular endothelial growth factor, transforming growth factor β in NSCs and CD200R, reactive nitrogen species/reactive oxygen species, insulin-like growth factor 1, tumour necrosis factor-α, Toll-like receptor-9, chemokine fractalkine, chemokine fractalkine receptor (CX3CR1), adenosine triphosphate-sensitive potassium channel IL-1β, leukemia inhibitory factor, interferon-Ɣ.[7,8,9] In the V-SVZ, microglia cells presents certain degree of activation level and constantly release cytokines and neurotrophic factors with respect to other brain areas. This phenomenon suggests that NSCs are regulated by microglia cells. All of these events occur under physiological conditions, but under pathological circumstances these signals can be magnified. After activation, microglia cells enter into a phagocytic state to remove cell debris and damaged. Phagocytic microglia releases neurotrophic factors and cytokines that activate NSCs, thus trigger cell survival and neural regeneration after lesion. Microglial phagocytosis is one of the principal mechanisms to regulate and preserve the homeostasis in the production of neural progenitors in the postnatal brain. Microglia also eliminates aberrant cells that might later give rise to malignant cells or brain tumors.

In a recent report, Xavier et al.[10] demonstrate the presence of a microglial subpopulation in the V-SVZ and the rostral migratory stream (RMS) of CX3CR1- enhanced green fluorescent protein mice, which have a locus of the fractalkine receptor CX3CR1 replaced by the gene encoding green fluorescent protein. They found a subpopulation of microglia (V-SVZ/RMS microglia) that displayed distinct morphologies depending on the zone where they reside. The authors observed that some cells of this V-SVZ/RMS microglia presented an alternatively activated macrophage phenotype and released IL-4 and IL-10 cytokines via signal transducer and activator of transcription 6 phosphorylation.

The authors suggested that the differences in morphologies respect other brain areas may be due to a lower expression of purinergic receptors P2RY12, P2RY6, and P2RY1. Purinergic receptors use ATP for their activation and appear to regulate the processes and phagocytosis in microglial cells at non-neurogenic regions. In their study, Xavier et al.[10] found that P2YR12 expression was virtually absent in the V-SVZ/RMS compared with the surrounding areas. Interestingly, the P2RY6 purinergic receptor, involved in phagocytosis process, is rarely expressed in the V-SVZ/RMS, which suggests that phagocytic events are not frequent in the V-SVZ and RMS. Conversely, P2RY1 expression is highly expressed in the V-SVZ/RMS region in migrating neuroblasts, reaffirming the importance of P2RY1 in the migratory process of new neurons. Ablation of microglia increases the number of cells Ki67+ and BrdU+ in the V-SVZ/RMS and disrupts neuroblast migration. This evidence suggests that microglia play critical roles in neuroblast survival and migration in the V-SVZ.

In summary, microglial cells are the most important immune-cell mediator in the adult brain that preserve tissue homeostasis, regulate synaptic pruning, and sculpt neural circuitry. These cells are important components of the V-SVZ and RMS that play key roles in neurogenesis, neural survival and cell migration. Studying the relationship between NSCs and microglia cells is important for understanding the homeostatic mechanism that control the V-SVZ neurogenenic niche and surrounding areas. Nonetheless, this neural-immune interaction is still not well understood. Thus, further studies are needed for clarifying the molecular events implied in the neurogenic process and determining its clinical relevance. 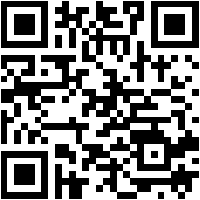