Hypoperfusion and hyperperfusion could be causes of early postoperative complications that lead to neurological deterioration in patients with moyamoya diseases (MMD) after superficial temporal artery (STA) and middle cerebral artery (MCA) anastomosis. Here, the authors described a case of child-onset bilateral MMD that manifested transient cerebral ischemia in the contralateral hemisphere after left STA-MCA bypass in young adulthood. A new onset of cerebral ischemia in the contralateral hemisphere and transient neurological deterioration suggested the fragile hemodynamics of MMD during early perioperative period. Serial evaluation of postoperative cerebral hemodynamics and perfusion might facilitate targeted management in patients with unstable or advanced MMD.

Moyamoya disease (MMD) is one of the major causes of stroke in children and adults. It is characterized by progressive stenosis or occlusion of terminal portion of internal carotid arteries and development of fragile collateral vessels (moyamoya vessels).[1] Revascularization surgery is a recommended therapy in these patients.[2] Although the long-term outcome of direct revascularization through superficial temporal artery (STA)-middle cerebral artery (MCA) bypass is generally favorable, early postoperative neurological events are still frequently reported and contribute to neurological deterioration.[3] The change of perioperative cerebral perfusion is suggested to be dynamic, therefore to identify the underlying mechanisms and risk factors might improve the postoperative management, especially in patients with advanced MMD and unstable hemodynamics. In MMD with unilateral STA-MCA bypass, symptomatic cerebral ischemia in the contralateral hemisphere occurs in about 3-14% of patients.[4-7]

We herein presented a case of childhood-onset bilateral MMD, which developed transient cerebral ischemia in the contralateral hemisphere after STA-MCA bypass in her young adulthood. Transient weakness of the left extremities and acute cerebral infarctions in the contralateral hemisphere were observed from postoperative Day 1 to Day 6. The neurological deficit improved after intravenous infusion of fluid and free radical scavenger. There were no subsequent neurological events, and the preoperative neurological deficit significantly improved during the follow-up period. The mechanism and management of the neurological events in the early postoperative period were further discussed with a literature review.

A 21-year-old female with 5-year history of paroxysmal limbs weakness presented to our hospital with a reoccurrence of symptoms and slurred speech 15 days ago. There was no family history of MMD. Digital subtraction angiography (DSA) revealed extensive stenosis of the bilateral terminal portions of the internal carotid arteries (ICAs) and abundant moyamoya vessels on both sides, leading to a diagnosis of MMD. The bilateral anterior cerebral artery (ACA) and the right posterior cerebral artery (PCA) were not identified. The left PCA was also involved with stenosis and collaterals of vascular network. Collaterals from the posterior circulation formed between right occipital and parietal lobe [Figure 1]. Magnetic resonance imaging (MRI) showed multiple infarct lesions in the bilateral watershed. Perfusion computed tomography (CT) showed a reduced cerebral blood flow of the bilateral hemisphere with a mild domain on the left side [Figure 2]. 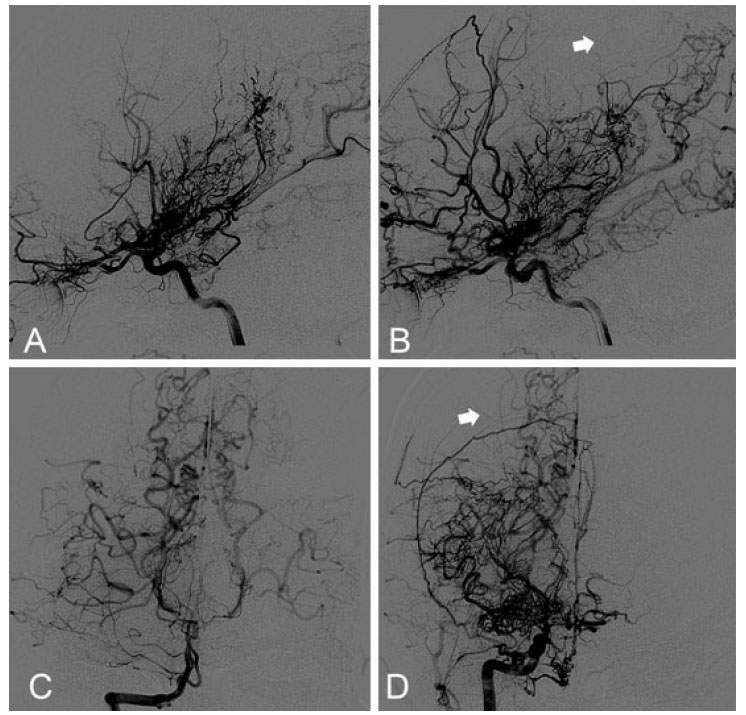 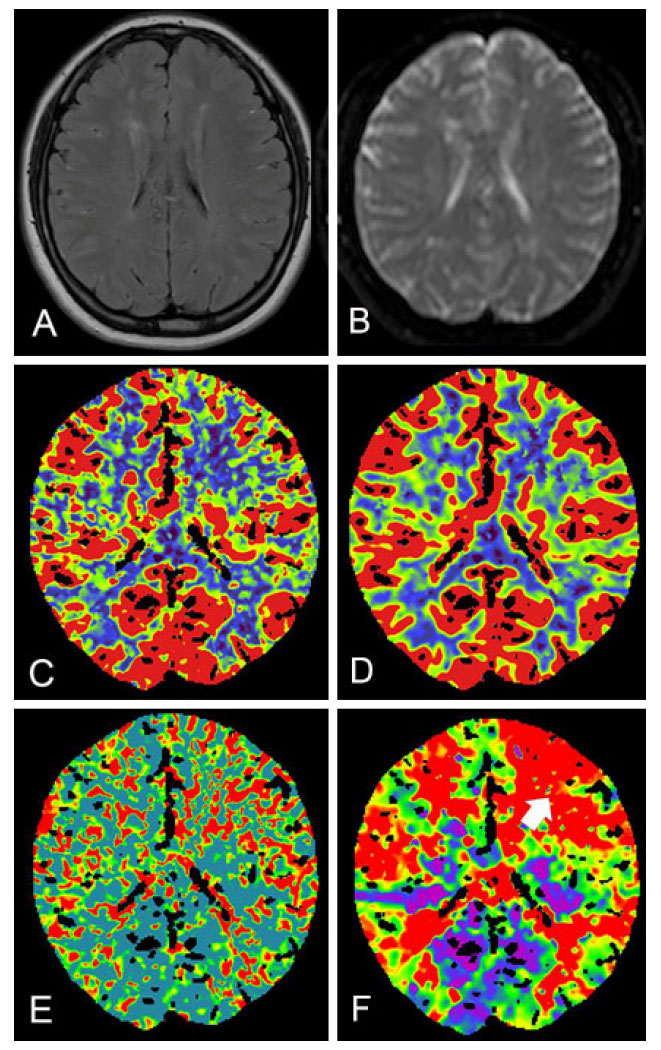 Considering the patient had barylalia, a left STA-MCA anastomosis was first performed between the parietal branch of the STA and MCA (M4 segment) supplying the frontal and parietal lobe. The intraoperative blood pressure (BP) remained between 120-140 mmHg. We followed our postoperative protocols with fluid infusion, a prophylactic anti-epileptic drug, aspirin, and statins. The patient did not display any neurological deficits after surgery until she appeared restless and delirious 8 h afterwards. We suspected hyperperfusion syndrome after revascularization, while the perfusion CT was not available at night. Consequently, the patient was managed with blood pressure control (systolic blood pressure between 110-130 mmHg) and intravenous fluid infusion. On the 1st day after surgery, she appeared to have barylalia and retrograde amnesia, thus intravenous edaravone (60 mg/day) was added. On the 2nd day after surgery, the retrograde amnesia completely resolved, while left limb weakness appeared with muscle strength of Grade 3. Postoperative imaging on the 3rd and 6th day after surgery revealed an improved perfusion of left hemisphere, but identified a de novo lesion between the right temporal and occipital cortex with high intensity on T2 weighted image (T2WI) and diffusion weighted image (DWI) and decreased cerebral blood flow (CBF), which was in the contralateral hemisphere of STA-MCA anastomosis [Figure 3]. Fluid infusion ensuring euvolemia, and edaravone were continued with systolic blood pressure between 130-140 mmHg. The patient’s left limb weakness was completely resolved by the 6th day after surgery. She was discharged 13 days after surgery with the barylalia relieved and no other neurological deficits during the latest follow-up period of 2 months. 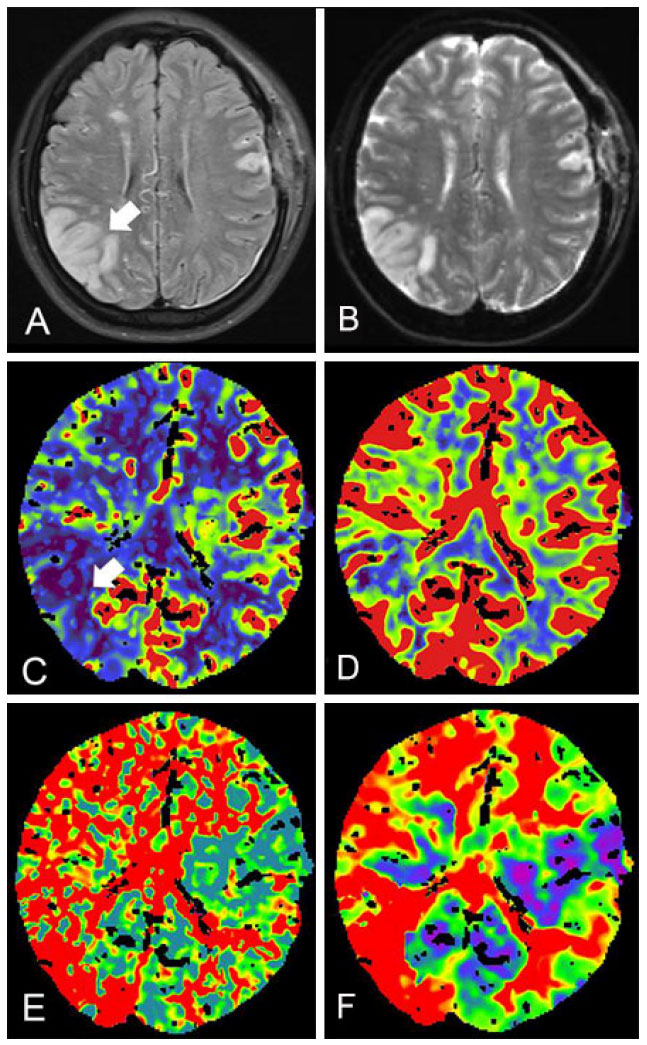 Extracranial-intracranial direct anastomotic bypass is recognized as a treatment for ischemic MMD with favorable long-term outcome.[1] In the acute postoperative period of STA-MCA bypass, however, transient neurological events or stroke can be observed despite the improvement of cerebral perfusion at the site of anastomosis.[1,3] Rapid, increased local perfusion and perioperative hemodynamic fluctuations after bypass surgery might increase the risk of abnormal perfusion in the adjacent area or remote regions, especially in patients with advanced stage, bilateral, or unstable MMD.[8-10]

In MMD with unilateral STA-MCA bypass, symptomatic cerebral ischemia in the contralateral hemisphere more commonly occurs in patients with advanced stage (Suzuki stage 4 to 6), PCA involvement and postoperative hypotension on postoperative Day (POD) 1 and Day 2.[7] Advanced Suzuki stage and PCA involvement indicate the progression of MMD.[11] In these patients, cerebral hemodynamics might be unstable and more susceptible to cerebral infarction after fluctuations of perfusion during the perioperative period.[7] The patient in this case had a bilateral advanced stage of MMD (stage 4 for the left and stage 3 for the right) with right PCA involvement [Figure 1]. Although the unilateral direct revascularization might directly influence the blood flow of the contralateral hemisphere through collaterals, the collaterals from the contralateral side, in the present case, were poorly developed and were mainly around the midline, which might not explain the ischemia of the remote convexity [Figure 1]. Retrospective analysis of DSA suggested that the right PCA collaterals to the watershed between parietal and occipital lobes were not well developed. Preoperative perfusion CT also indicated impaired perfusion in the aforementioned area [Figures 1 and 2]. These angioarchitecture and perfusion features might be the underlying factors contributing to the focal ischemic deterioration after stress, including surgery and delirium. Therefore, intensive perioperative care should be recommended for these MMD patients with high risk factors [Table 1].[12] Real-time monitoring of the cerebral blood flow (CBF) showed that the regional CBF after revascularization followed a variable pattern with significant decreases between 12 h and 24 h after surgery and at 36 h after surgery.[13] This CBF pattern correlated with the onset of a transient neurological event in our case and suggested a careful blood pressure management during the early postoperative period. In addition, rather than arbitrarily maintaining the blood pressure between certain parameters, the blood pressure management should be referenced to the preoperative level to avoid a rapid decrease from the baseline.[7] Recent data suggested that prophylactic mild blood pressure lowering might reduce the risk of hyperperfusion without increasing the incidence of ischemic stroke,[14] although its validation still needs to be verified in other independent cohorts and high risk subgroups.

Both hyperperfusion and hypoperfusion have been identified as reasons for transient neurological deficits [Table 1].[6,8,13] Postoperative cerebral perfusion status might fluctuate from initial hyperperfusion after bypass surgery to local and transient hypoperfusion before it normalizes to a new level.[13] Moreover, the perfusion at different region might also be distinct during the same period of time.[10] CBF evaluation at the early postoperative period (POD 1 to 3) might be recommended to tailor the perioperative management based on the perfusion status.[15] The DWI and fluid attenuated inversion recovery (FLAIR) sequence could also be helpful to identify hyperperfusion and acute ischemia with typical radiological features.[15-17] In our case, we suspected that the transient delirium might have been associated with hyperperufusion syndrome, so we followed our previous protocol with CBF analysis and neuroimaging on the third postoperative day. However, in this case, the patient’s neurological event occurred within 2 days after surgery, and the imaging beyond that time did not provide a timely evaluation for tailoring management prior to the formation of the new cerebral infarction. Considering the time pattern of postoperative fluctuation in cerebral perfusion, an early combination of CBF analysis and neuroimaging within 2 days after surgery might be reasonable [Table 1].[13,15]

Although the positron emission tomography (PET) and single-photon emission computed tomography (SPECT) are the most extensively used quantitative methods for cerebral hemodynamics assessment, the use of radionuclides and the high cost of the examination limit the serial perioperative PET or SPECT scans. Therefore, the alternative noninvasive methods without contrast agent, such as blood-oxygen-level dependent functional MRI (BOLD-fMRI) or arterial spin labeling MRI (ASL-MRI), might be of great clinical importance. Previous studies suggested that the delayed and reduced magnitude of the BOLD response might indicate the severity of compromised hemodynamics in patients with cerebral ischemic diseases.[18,19] A most recent report observed BOLD responses to specific stimulation in patients with MMD before and after revascularization, and found a predicator for postoperative outcomes, suggesting the feasibility of using BOLD-fMRI for individualized assessment of cerebral hemodynamic impairment and hemodynamic improvement after revascularization in patients with MMD.[20] ASL is another promising technology for cerebral hemodynamics assessment in perioperative management of MMD.[21] Several studies have demonstrated the advantage and accuracy of ASL in cerebral blood flow evaluation.[22,23] Recent advances in multiple-parameter ASL (multiple inversion time-pulse or post labeling delay) might allow for more precise assessment of cerebral hemodynamics.[24-26] Future studies in neuroimaging will provide better radiological tools for evaluation of cerebral blood perfusion.

Free radical scavenger and anti-inflammatory medicine might also be helpful in reducing the risk of perioperative neurological events.[15] A recent case-control study suggested MMD patients using edaravone (a free radical scavenger) had a decreased frequency of transient neurological event after direct revascularization surgery.[27] We added ederavone in this case as recommended in some protocols, and the neurological function markedly improved without disability, despite a cerebral infarction. Minocycline, a matrix metalloproteinase-9 inhibitor, might also ameliorate the reperfusion injury at the site of anasotmosis and the remote area after blood pressure reduction and has been used in patients with MMD to prevent both hyperperfusion and cerebral infarction at the remote area.[9,28,29] Further studies might be feasible to unravel the therapeutic effect of these medicines in larger populations.

The authors would like to thank members of the Joint Cerebrovascular Surgery Study Project of Peking University International Hospital and Beijing Tiantan Hospital, and Dr. Sun Yuming of the Department of Neurosurgery at Sanbo Brain Hospital, Capital Medical University.

The treatment and data collection in our study involving the patient is consistent with the ethical standards of the Institutional Review Board. 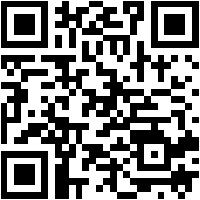