© The Author(s) 2019. Open Access This article is licensed under a Creative Commons Attribution 4.0 International License (https://creativecommons.org/licenses/by/4.0/), which permits unrestricted use, sharing, adaptation, distribution and reproduction in any medium or format, for any purpose, even commercially, as long as you give appropriate credit to the original author(s) and the source, provide a link to the Creative Commons license, and indicate if changes were made.

The immunological aspects of autoantibodies directed against paranodal and nodal proteins form a prominent field of research. Contactin-1 and contactin-1 associated protein, gliomedin and neurofascin (NF) are Ranvier node-related proteins[1,2]. Antibodies against these proteins have been identified in chronic demyelinating conditions, such as multiple sclerosis (MS) and chronic inflammatory demyelinating polyradiculoneuropathy (CIDP); and in acute demyelinating diseases such as Guillain-Barre syndrome[3,4]. Myelin and the paranodal axoglial junctions flanking the nodes of Ranvier are not merely passive transmitters of electric signals: instead, they have essential roles in maintaining the structural integrity of myelin-axolemmal interactions, bidirectional signaling and regulation of ion channels[5].

Here, we will focus on NF155, a major constituent of the Ranvier paranodal junction[6]. NF155 belongs to the L1 family of transmembrane cell adhesion molecules [Figure 1], typically presenting an evolutionary well-conserved protein domain structure with six immunoglobulin and five fibronectin type III domains, a transmembrane domain and a cytoplasmic domain with 113 amino acids[7,8]. It is expressed at paranodes by terminal loops of myelin[9] and its main function is to stabilize these paranodes. Other isoforms of NFs (NF166, NF180 and NF186) are equally involved in dynamic mechanisms of synaptic stabilization, neural outgrowth and clustering of sodium channels[7]. 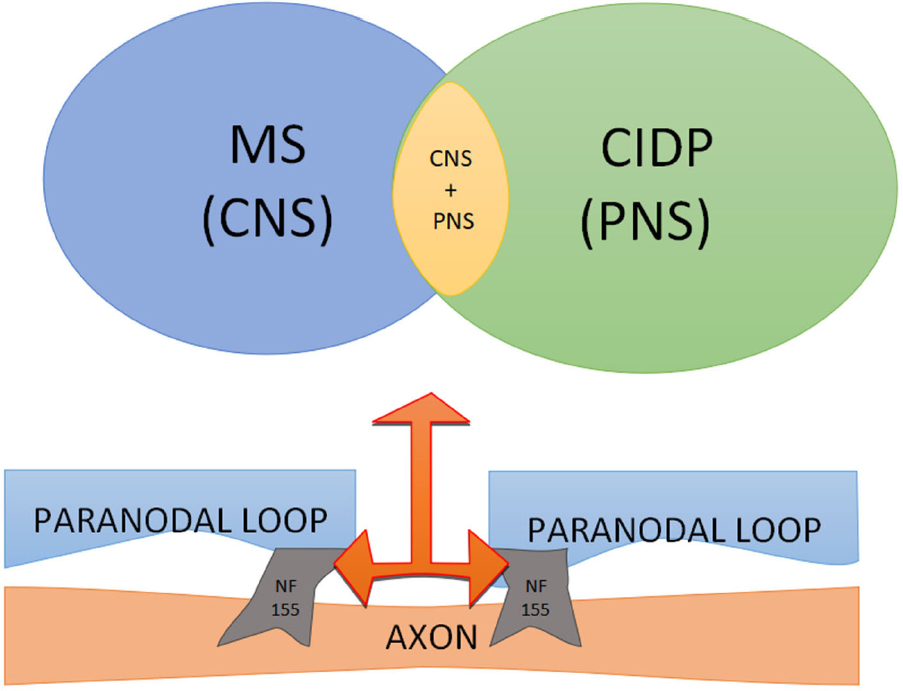 Patients with CIDP who present antibodies against NF155 have a particular disease course that involves onset at younger age, tremors, ataxia, dysarthria, nystagmus, extremely high protein levels in spinal fluid, symmetrical spinal root and plexus hypertrophy[10,11]. In addition, over 70% of these patients can have abnormal visual-evoked potentials during the course of CIDP[10]. CIDP patients with anti-NF155 antibodies may present demyelinating lesions in the central nervous system, along with a remarkably poor response to intravenous courses of immunoglobulin[12]. Overall, patients with CIDP with overlapping central and peripheral demyelination associated with presence of anti-NF155 antibodies exhibit greater disability.

In addition to the peculiarities of peripheral demyelination associated with presence of NF155 antibodies, diseases of the central nervous system also show particular features when anti-NF155 antibodies are identified. Ten percent of patients fulfilling the diagnostic criteria for MS[13], may have antibodies against NF155[14]. Cases of neurological disease with onset typical of MS that were subsequently diagnosed as CIDP have been described[15-17]. Interestingly, presence of antibodies against NF155 is significantly more frequent in patients with primary progressive forms of MS than in those with relapsing disease[18].

Patients who develop antibodies against NF155 may ultimately present a different form of demyelinating disease with both central and peripheral involvement. There are often signs of cerebellar, spinal root and plexus involvement, optic nerve demyelination and high levels of protein in the spinal fluid in these cases. Anti-NF155 antibodies may form a biomarker for a particular form of demyelinating neurological disease. NF155 does not activate a complement[9]. Therefore, at least in theory, patients with anti-NF155 antibodies might respond well to therapies using ocrelizumab and rituximab. “Anti-NF155 demyelination” may be a different disease with peculiar presentation and therapeutic management.

Made substantial contributions to conception of the study, as well as provided administrative, technical, and material support: Goncalves MVM, Fragoso YD

Both authors declared that there are no conflicts of interest.