Bartonella henselae neuroretinitis in a patient without cat scratch

© The Author(s) 2019. Open Access This article is licensed under a Creative Commons Attribution 4.0 International License (https://creativecommons.org/licenses/by/4.0/), which permits unrestricted use, sharing, adaptation, distribution and reproduction in any medium or format, for any purpose, even commercially, as long as you give appropriate credit to the original author(s) and the source, provide a link to the Creative Commons license, and indicate if changes were made.

Neuroretinitis is characterized by optic disc swelling with macular star, and affects 1%-2% of the patients with Bartonella henselae infection. This condition needs to be considered in the differential diagnosis of unilateral optic neuropathy in young adults. A 44-year-old woman presented with a progressive visual loss in right eye that was described as a central scotoma with altered color perception. Medical history was negative except for Hashimoto’s thyroiditis. The examination evidenced a relative afferent pupillary defect in right eye and marked papillary oedema involving the macular region. Brain and orbits magnetic resonance imaging were normal, and fundoscopy showed star-shaped hard exudates. Autoimmune and infective screening revealed IgM and IgG antibodies against Bartonella henselae, suggesting for recent cat-scratch disease. She was treated with high-dose intravenous steroids and doxycycline. One month later she fully recovered, and she had no relapses. We diagnosed a Bartonella henselae neuroretinitis (finally the patient recalled she had stroked stray cats, not being scratched). In conclusion time course and absence of pain differentiate neuroretinitis from other optic neuropathies. Fundoscopic image of macular star is a clue for diagnosis, and visual recovery is usually excellent.

Neuroretinitis is a rare inflammatory optic neuropathy with direct involvement or autoimmune activation against the optic nerve. The inflammation of the optic disc vasculature causes exudation of fluid into the peripapillary retina, taking a characteristic macular star shape. Usual presentation is monocular central visual loss with discromatopsia and papillitis on funduscopic evaluation[1].

The differential diagnosis includes inflammatory optic neuropathies such as sarcoidosis, systemic lupus erythematosus, Behçet syndrome, inflammatory bowel disease, and paraneoplastic syndromes[2]. Other causes are infections: herpetic viruses, HIV, West Nile virus and rarely flu or mumps, toxoplasmosis and toxocariasis, syphilis, Lyme disease, tuberculosis, rickettsiosis, and cat-scratch disease (CSD)[3]. CSD is related to Bartonella species and transmitted through skin lesions after contact with infected animals[4]. A contact with cats is reported in 90% of CSD, and scratches or bites in 60% of the patients[5].

Typical CSD presentation is a small papule at the inoculation site, followed by regional and systemic lymphadenopathy and fever. Ocular involvement occurs in 5%-10% of the patients, mostly presenting Parinaud syndrome (fever, regional lymphadenopathy, and follicular conjunctivitis). Neuroretinitis occurs in 1%-2% of the patients[6], and other neurological manifestations are meningoencephalitis, myelitis, and acute polyneuropathies[7,8].

Currently, antibiotic therapy for Bartonella complicated infection with doxycycline and rifampin is recommended, either alone or in combination with corticosteroids. Habot-Wilner et al.[10] showed a significant visual acuity improvement in those patients treated with antibiotics and corticosteroids if compared to those receiving only antibiotics. In the majority of cases no further progression of ocular inflammation was observed after therapy, and visual acuity recovered after 1-4 weeks[11].

A 44-year-old woman presented to the Emergency Department with a progressive visual loss and altered color perception in the right eye, started one week before with no ocular pain, headache, dizziness, nausea or vomiting.

Her past medical history included Hashimoto’s disease, treated with hormonal replacement therapy in the last 10 years. Particularly, the patient denied previous neurological or visual deficit. Her familial history was negative for neurological, vascular or autoimmune disease, and both her parents suffered from colorectal cancer. About two weeks before, she had fever and was treated with amoxicillin and clavulanic acid (875/125 mg b.i.d) for otitis. She reported a mild indolent cervical lymphadenopathy occurred 5-7 days after fever, and denied any cutaneous manifestation. Routine blood examinations were normal, including reactive C protein (0.05 mg/dL, N.V. < 1.00 mg/dL). She had neither fever, night sweats, weight loss or other constitutional symptoms nor lymphnod involvement at the examination. 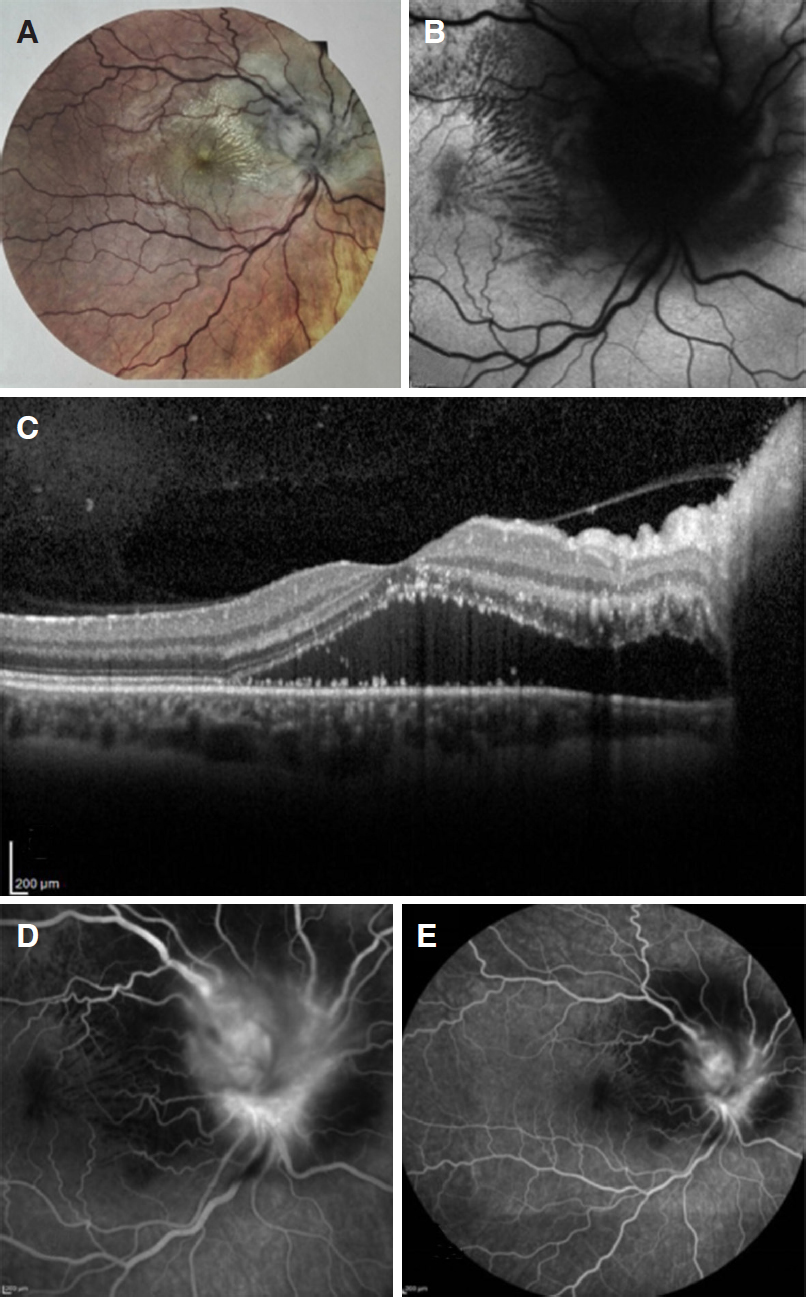 A brain tomography was immediately performed to exclude an intracranial mass and one week later she had a magnetic resonance imaging (MRI) of brain and optic nerves, that resulted normal. Visual evoked potentials (VEP) showed a severe right delay of conduction (P100 latency was 123 ms) [Figure 2]. 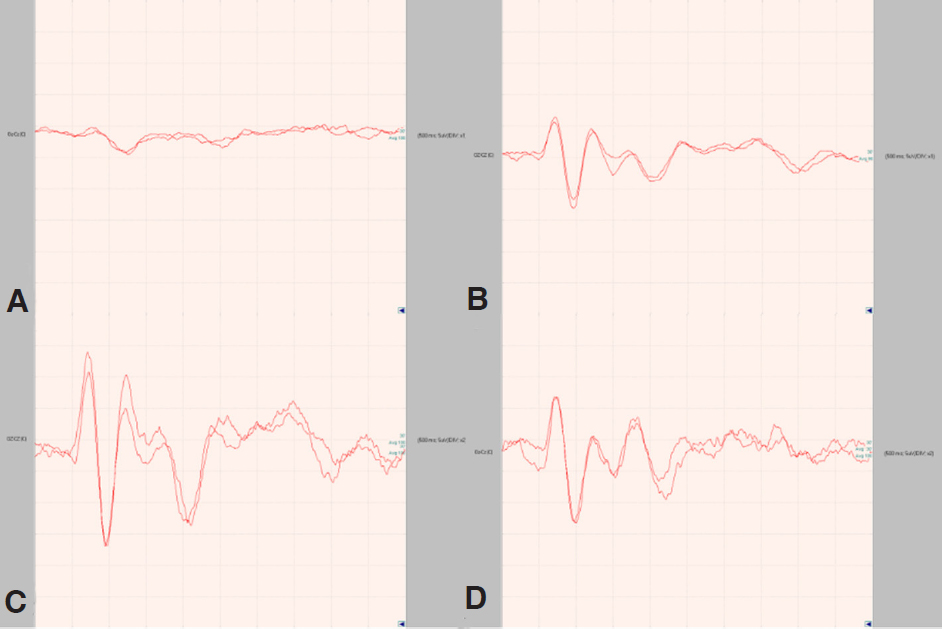 Since the ophthalmological pattern was highly suggestive for an inflammatory neuroretinitis, a full blood analysis for autoimmune and infective causes was performed. Erythrocyte sedimentation rate was mildly elevated (38 mm/h N.V. 0-15), and serologic test for herpetic viruses including cytomegalovirus and Epstein Barr showed immunization from previous infections. Serology for toxoplasmosis, syphilis, Lyme disease and Toxocara canis were negative. Serology for Bartonella infections showed previous infection from Bartonella quintana (IgM antibody titer assay was not performed because of negative immunofluorescence, IgG titer was 1:128 that was at upper limit for positivity in our laboratory) and recent infection from Bartonella henselae with both IgM and IgG (IgM titer was 1:40 N.V. < 20, IgG was 1: 512 N.V. < 64).

A high dose intravenous steroid regimen (methylprednisolone 1000 mg/die for 3 days) was started, followed by oral steroid tapering for one month. According to an infectiology consultation, antibiotic therapy with doxycycline 100 mg b.i.d for two weeks was started. 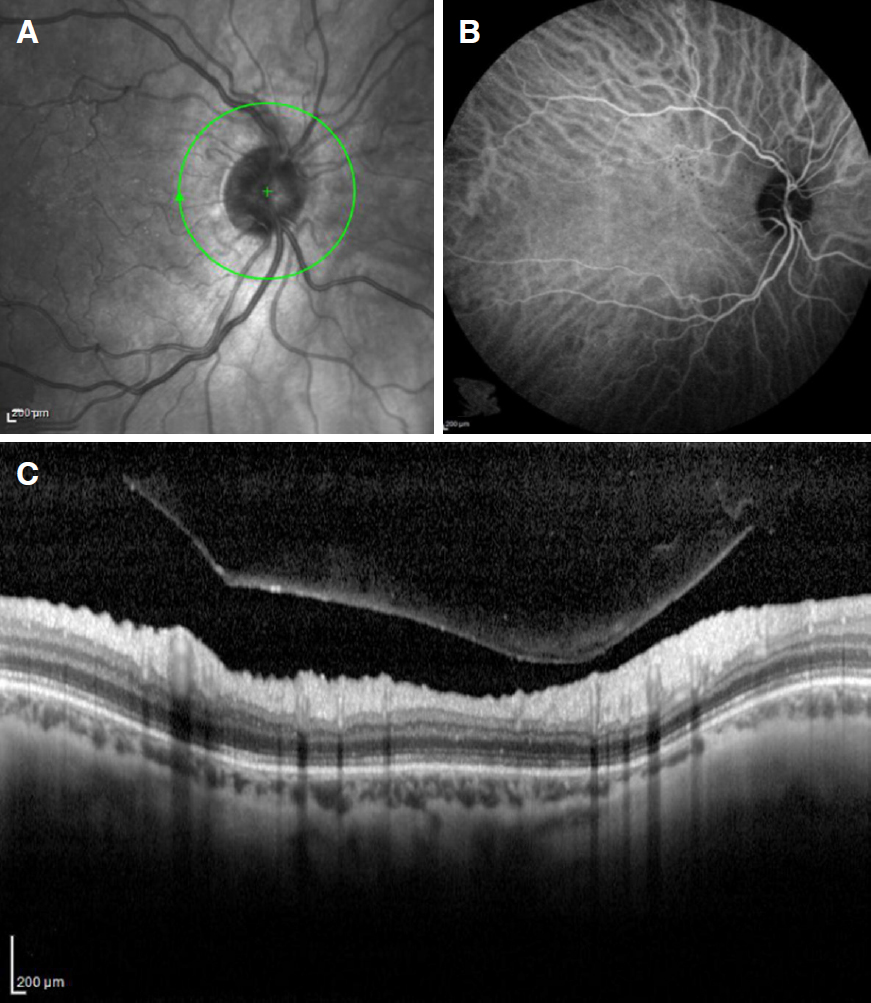 At that time, the patient was asked about previous contact with potentially infected animals, as she didn’t own domestic animals. She recalled having handled stray cats during previous summer holidays (about one month before visual symptoms started), but she denied having been scratched.

We presented a young woman with a unilateral loss of vision caused by a CSD isolated neuroretinitis with mild constitutional symptoms and no history of scratch. Neurological examination, brain MRI and VEP did not give a clue for this diagnosis, whereas ophthalmological results suggested the possibility of an infection. The prompt treatment with antibiotics and steroids brought a complete resolution of the vision deficit.

This case represents a clinical rarity, first because of the diagnosis of CSD without cat scratch. Notably, CSD diagnosis requires the presence of at least 3 of 4 criteria including: a history of traumatic cat exposure, a positive test for CSD antibody, regional lymphadenopathies, and serum analysis excluding concurrent causes[12,13]. Only 2 criteria were fulfilled in our case. Celiker et al.[14] reported three cases of isolated CSD neuroretinitis without contact with cats, and only 26% of patients recalled a history of cat scratch or bite in a case series of 19 patients with ocular bartonellosis[15]. This could be related to animal transmission by feces, that host Bartonella for several days and could infect man through an open wound or mucosae. Moreover, direct ocular infection is possible through the conjunctiva by eye rubbing, contaminated cosmetics or contact lenses[16].

Our diagnosis of CSD neuroretinitis relied on the typical hallmarks for this condition: absence of pain, progressive course of visual loss in few days, initial bilateral involvement, and no altitudinal visual deficit. Time interval of 6 weeks between presumed exposition to infected animal and initial symptoms is highly suggestive[17]. Instrumental findings were also indicative for neuroretinitis: i.e., OCT scan with subretinal fluid (as happens at very early stage with direct ophthalmoscopy or fluorescein angiography still normal)[18], and the presence of macular star (pathognomonic of neuroretinitis). We also performed fluorescein angiography to exclude retinal arteriolar occlusions, a complication of ocular bartonellosis associated with very poor visual recovery[19].

Serological analysis confirmed our suspicion with both IgM and IgG for Bartonella henselae. This immunofluorescence assay has good specificity for IgM (87%-96%) and IgG (69%) although sensitivity is greater for IgG (88%-98%) compared to IgM (50%-62%)[20]. False positives due to cross-reaction are highly improbable being about 2%-5% for Epstein Barr/Cytomegalovirus, and 20%-50% for Coxiella burnetii/non-henselae bartonellosis (very rare in our country)[21]. IgM presence allows to date back infection to the previous 3 months, whereas IgG remains detectable in the 25% of patients one year later.

The combination of doxycycline and steroids shorten the course of disease and accelerate visual recovery compared to natural history of illness in our case[22]. No side effects were reported.

CSD neuroretinitis is a rare clinical condition that must be considered in young patient with rapidly progressive unilateral visual loss. It requires a prompt neuro-ophthalmological evaluation in order to establish the correct diagnosis and start an early specific treatment.

Reviewed the case as well as the manuscript, providing substantial contribution to discussion and conclusion: De Cillà S, Cantello R

The patient gave written informed consent for publication. All clinical information submitted is anonymous and the patient is not recognizable from the iconographic material. 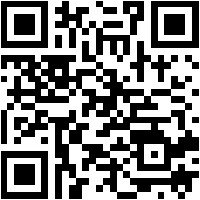