A 53-year-old Chinese woman was admitted to the Neurology Department of our hospital because of progressive limbs weakness, numbness, and edema.

Approximately 7 months before admission, she began to develop limb weakness and numbness. Twenty days before admission, the patient developed fever and edema. She had been diagnosed with diabetes and treated with insulin i.h. for 3 months prior to admission. Her past medical history was unremarkable, with no history of smoking, alcohol use, HIV infection, tuberculosis, or tumor. 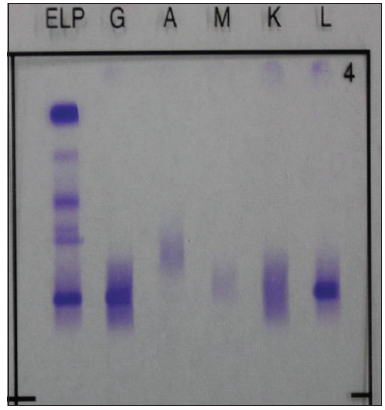 Biopsy of the lymph nodes from the right cervical chain revealed vascular, follicular, and lymphoid hyperplasia, thickening of the mantle zone, and the formation of concentric lymphocytes surrounding the germinal center, which were hyalinized, atrophic, and surrounded by blood vessels. Vascular proliferation was found, in addition to sinus histiocytosis in the interfollicular parenchyma [Figure 2]. Meanwhile, immunohistochemical analysis revealed positive staining for CD3, CD4, CD8, CD20, CD21, CD138, kappa, lambda, Pax-5, and Ki-67. These histological findings are consistent with the hyaline vascular variant of Castleman disease. Patient improvement was not apparent after treatment with dexamethasone for 10 days. The patient was transferred to the Hematology Department for further treatment.

Criteria for the diagnosis of POEMS syndrome[11]

The diagnosis of POEMS syndrome is confirmed when both of the mandatory major criteria, 1 of the 3 other major criteria and 1 of the 6 minor criteria are present. *Summary of frequencies of POEMS syndrome features based on largest retrospective series,[2,3,6-9]†Takasuki and Nakanishi series are included, even though only 75% of patients had a documented plasma cell disorder. Because these are among the earliest series describing the syndrome, they are included, ‡There is a Castleman disease variant of POEMS syndrome that occurs without evidence of a clonal plasma cell disorder that is not accounted for in this table. This entity should be considered separately, §A plasma VEGF level of 200 pg/mL is 95% specific and 68% sensitive for a POEMS syndrome,[12] **Because of the high prevalence of diabetes mellitus and thyroid abnormalities, this diagnosis alone is not sufficient to meet this minor criterion, ***Approximately 50% of patients will have bone marrow changes that distinguish it from a typical monoclonal gammopathy of undetermined significance or myeloma bone marrow.[24] POEMS: polyneuropathy, organomegaly, endocrinopathy, M proteins and skin changes, VEGF: Vascular endothelial growth factor

The pathogeny of POEMS syndrome remains unclear. It is assumed that hepatitis B antigen may play a role in the etiology of this lymphatic disorder.[22] Our patient was positive for HBV. A previous study confirmed that increased levels of tumor necrosis factor alpha (TNF-α), interleukin-6 (IL-6), and VEGF in patients of POEMS syndrome are correlated with disease activity.[23] However, we did not assess TNF-α, IL-6, or VEGF. Therapy for POEMS syndrome should include radiation, chemotherapy, peripheral blood stem cell transplant, targeting therapy, intravenous gamma-globulin therapy, plasmapheresis, corticosteroids, etc.[11] The clinical course of POEMS syndrome is also chronic. A previous study revealed that the median survival time of patients with POEMS syndrome is 165 months.[6] Another study reported that the prognosis of MCD patients was poor, demonstrating a median survival time of 30 months.[20]