Aim: The aim was to investigate the electro‑physiological characteristics in disease progression of Guillain‑Barre syndrome (GBS) and observe the effect of conduction block (CB) in classification and severity of the disease.

Methods: Two hundred and ninety‑four patients with GBS were divided into acute inflammatory demyelinating poly‑neuropathy (AIDP) group, acute motor axonal neuropathy (AMAN) group and equivocal group according to their electro‑physiological results and then reclassificated after electro‑physiological review. All of the patients were followed for 6 months since their attacks.

Results: Bad prognosis is more pronounced in AMAN group than in AIDP group (P < 0.05). Most of the patients classificated as AIDP transformed into AMAN when CB occurred in the early phase of the disease. There is a positive relationship between CB in the early phase of the disease and severity of illness (P < 0.05), but CB showed no correlation with prognosis of the patients (P > 0.05).

According to its clinical manifestation, laboratory examinations and electro-physiological characteristics, GBS can be classified as acute inflammatory demyelinating poly-neuropathy (AIDP), acute motor axonal neuropathy (AMAN), acute motor sensory axonal neuropathy, Miller-Fisher syndrome (MFS), acute autonomic neuropathy, and acute sensory neuropathy.[1] GBS is single-phase process and self-limiting, so most of the GBS patients have a good prognosis, but some may have a bad prognosis clinically. As the disease progresses, some of the AIDP patients may turn into AMAN; some patients without obvious curative effect may progress into chronic inflammatory demyelinating polyneuropathy; and some patients may transform into relapsing GBS. Neural electro-physiological examination, an irreplaceable auxiliary examination for diagnosis of GBS, can provide an important basis for the diagnosis and classification of the disease. In this study, the clinical data of 338 GBS patients who were hospitalized during the period of August 2008 to February 2013 were analyzed retrospectively.

Keypoint electromyography made by the Danish Dandi Company was used. Since early stage of the disease, the electro-physiological result showed abnormal F-wave only, and the result of nerve conduction showed reduction of compound muscle action potential in most cases, so all patients were performed at least one electro-physiological examination 2 weeks after the onset of disease. Of the patients, 132 cases had their first electro-physiological examination 2 weeks after the onset of disease and had another check within 10-14 days after the first check: (1) All patients had nerve conduction test by using surface electrodes to record and stimulate. We detected motor conductive test on bilateral median nerve, ulnar nerve, peroneal nerve, and tibial nerve recording the motor nerve conduction velocity, distal latency, and amplitude, etc., and observed whether there was a nerve conduction block (CB) or not. Sensory conduction test were performed at median nerve, ulnar nerve, sural nerve, and phil shallow nerve recording the sensory nerve conduction velocity; (2) all patients had F-wave detection on the median nerve, ulnar nerve peroneal nerve and tibial nerve by recording the wave rate, latency, etc.; (3) needle electromyography were performed on thenar muscle, hypothenar muscle, deltoid, quadriceps, pretibial muscle, and gastrocnemius by observing whether there was a spontaneous activity or not on the resting moment and by testing the motor unit potential and recruitment order of slight and strong muscle contraction.[2,3] 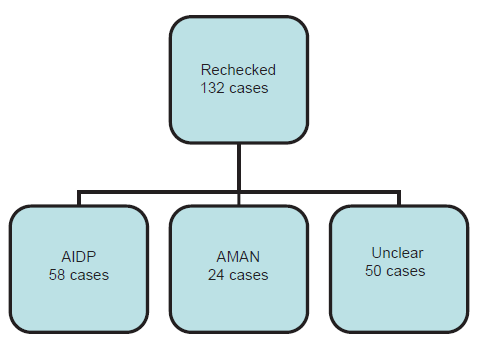 Relationship between early nerve conduction block and its electro‑physiological changes 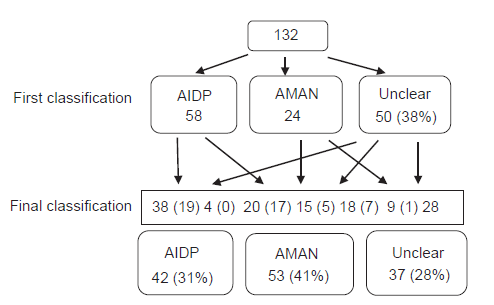 Relationship between different types and the prognosis

The first electro-physiological results and the recheck results all demonstrated that comparing to AIDP, AMAN had more cases with poor prognosis [Tables 2 and 3] (all P < 0.05).

All cases classifications and prognosis

Results demonstrated that the severity of the illness was related to the development of CB in early stage in AIDP group and unclear classification group (all P < 0.05) [Table 4].

Results demonstrated that irrespective of the severity of the disease, poor prognosis was not related to the development of CB (all P > 0.05) [Tables 5 and 6].

In this study, more male than female patients were included. Respiratory tract and intestinal infections were the most common precursor events. A few patients had influenza vaccine, H1N1 influenza vaccine and rabies vaccine before the onset of the illness. It has been reported that H1N1 vaccine maybe is a risk factor of GBS, but season influenza vaccine was not related to it.[5,6] In our data, there is no evidence that H1N1 influenza vaccine was related to GBS. The most common symptoms were symmetrical limb weakness and numbness. Sensory disturbance is usually milder than motor disturbance with reducing or disappearing tendon reflex. The common cranial nerve damages are facial nerve paralysis, drinking water choking, hoarseness, and ophthalmoplegial. All the cases were followed by telephone for 6 months after hospital discharge. The response rate was 65.0%. Twenty-one percent of the patients had serous sequel which was the same as those reported in the literature. The mortality was 10.6% which was higher than previously reported.[6]

The most common subtypes of GBS are AIDP and AMAN with only motor fiber damage. According to the literature, in North America and Europe more than 90% of the patients is classified as AIDP,[4] but in China, the most common subtype is AMAN, and 65% of the GBS are AMAN.[7] In this study, most cases among the 294 GBS patients were AIDP. Of these, 132 cases were classified as AIDP based on their first electro-physiological examination. These findings are in contrast with what previously reported.

Because the classification based on early stage GBS electro-physiological results is inaccurate, electrophysiology testing was repeated after the illness developed and the percentage of AIDP and AMAN cases changed comparing to the early stage results.[8] We classified patients into AIDP and AMAN groups and unclear classification group which included patients whose electro-physiological testing were normal and those who did not meet the diagnostic criteria of AIDP and AMAN. We found that during disease progression electro-physiological results, as well as the electro-physiological classification, changed. The percentage of AMAN patients after recheck increased significantly compared to the first check (from 18% to 41%), which is the same as reported literature,[8,9] and AIDP reduced from 44% to 31%. We also found that AMAN had a worse prognosis than AIDP, and this finding is consistent with the literature,[10,11] thus suggesting a poor prognosis in more patients. The classification based on early stage GBS electrophysiologic results only may lead to inaccurate judgment of the patients’ diagnosis and prognosis, instead continuous electrophysiology recheck can reflect the change of patient’s condition without delay.

Among the patients transforming from AIDP into AMAN, CB occurred in 17 cases in the early onset of the illness: 5 and 7 cases in AMAN and unclear classification group, respectively. CB is a blockage in a nerve that prevents impulses from being conducted across a given segment although the nerve beyond is viable and is one of the important electro-physiological parameters of peripheral nerve functional status. CB is one of the physiological results caused by demyelination and is also the basic physiological mechanism of most clinical manifestations.[12] Most studies of CB published before are on multifocal motor neuropathy and amyotrophic lateral sclerosis, peroneal muscular atrophy and peripheral neuropathy caused by pressure.[13] Though conventional wisdom holds that the main cause of CB is demyelination and CB is the typical characteristics of demyelinating, recent studies demonstrated that demyelination is not the only reason for CB. It can caused by demyelination, depolarization on node of ranvier nearby axolemma, hyperpolarization and sodium channel damage.[14] The damage of nearby axolemma may cause CB, electro-physiological manifest as decreased amplitude, discretized waveform. If the illness continues to progress, reversible CB will turn into irreversible CB, and axonal degeneration. This might explain why some of the CB cases transformed into AMAN in electro-physiological classification.

Our study demonstrated that CB not only occurred in AIDP patients, but also in AMAN and unclear classification patients. In recent years, other groups found that CB plays an important role in axon damaged AMAN.[15,16] Kuwabara et al.[17] thought that the possible cause of CB in AMAN was axonal degeneration. The bridge type union of GM-1 antibody-mediated inflammatory cells and axons, the release of inflammatory mediators, local acidosis, damage on sodium ion channel of Axonal membrane and tight junction of axon myelin (some authors believe that this is a different type of demyelination from AIDP) resulted in a further decline of the safety factors, eventually leading to CB.[18]

Due to the objective condition limit that our patients mostly come from surrounding cities and counties, and even other provinces, it is difficult to diagnose these patients’ neurological recovery face-to-face after they are discharged from our hospital. We have to perform telephone follow-up for most of them. At the same time, many patients filled temporary numbers in the contact information form when hospitalized, which were no longer used after they went back. This also limited the follow-up results, and the response rate was only 65%. Furthermore, through telephone follow-up, we can’t evaluate the neural function of patients completely and clearly. We will try to improve this in future work and research.

In conclusion, reversible CB might be the cause of changes in patients’ electro-physiological classification. CB is not only a typical electro-physiological manifestation in AIDP, but also a manifestation of axonal degeneration for AMAN in the early stage. CB and axonal degeneration are caused by immune- mediated damage factors which attack axon membrane on the motor fiber. To a certain extent, CB is very helpful in classifying the severity of the illness.[14] Electrophysiology recheck can be very meaningful to reveal change of patient’s condition, classification alteration and severity of the nerve damage in time. 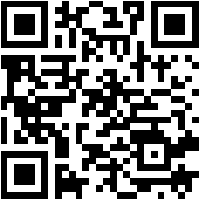