Toluene‑induced leukoencephalopathy is a frequently seen medical condition worldwide; however the lack of specific clinical manifestations and laboratory tests makes it difficult to diagnose. Neuroimaging and medical history are often crucial to diagnosis of this disorder. In this report, a case is presented of a patient suffering from toluene induced leukoencephalopathy with deteriorating cognition impairment and characteristic magnetic resonance imaging (MRI) findings, typified by a “sunflower-like” change in T2-weighted imaging. In addition, the pharmacokinetic properties of toluene are reviewed, as well as the clinical manifestations, typical MRI findings, neuropathology, possible mechanism, and treatment of toluene induced leukoencephalopathy.

A 44-year-old male patient presented to the clinic with dizziness, headache located primarily in the occipital region, memory decline, and a dull response, occurring over a period of 1-month with gradual deterioration. The patient had been a shoemaker for 3 years and had daily contact with toluene-containing glue for around 10 h a day. The patient had no history of vascular risk factors such as hypertension, diabetes, smoking, or alcohol, and there was no family history of similar symptoms. No other features of note were present in the patient’s medical history. Physical and neuropsychological examination revealed memory decline, impaired calculation, and visuospatial impairment, with a mini-mental state examination (MMSE) score of 23. Blood tests showed increased levels of total cholesterol (6.7 mmol/L) and triglycerides (3.6 mmol/L). Blood cell counts, fasting glucose levels, liver and renal function, and levels of folic acid, vitamin B12, and ferritin were all normal. The possibility of syphilis or human immunodeficiency virus infection was also excluded. Intracranial pressure was 180 mmH2O as measured by lumbar puncture; however no abnormalities were observed upon further examination of the cerebrospinal fluid. Levels of protein (0.37 g/L), glucose levels (3.67 mmol/L), chloridion (124.4 mmol/L), aspartate transaminase (15.2 U/L), lactate dehydrogenase (15.9 U/L) and adenosine deaminase (15.18 U/L) were all normal. The total cell count was 0.008 × 109/L, and the white blood cell count was 0.001 × 109/L. Pandy’s test was negative. No evidence of bacterial infection was detected using Gram stain, ink stain, acid-fast stain, or Mycobacterium tuberculosis culture. DNA-based tests for cytomegalovirus, Epstein-Barr virus, and herpes simplex virus were all negative. Chest X-rays, electrocardiogram, and ultrasonography of the heart and abdomen detected nothing unordinary; however, a slight abnormality was observed on the electroencephalogram. Most importantly, cranial MRI of the patient showed diffuse cerebral white matter hyperintensity [Figure 1], which resembled a characteristic “sunflower-like” change in T2-weighted images. The patient was diagnosed with toluene-induced leukoencephalopathy according to the “Diagnostic Criteria of Occupational Acute Toluene Poisoning” of China. After 2 weeks of treatment with mannitol, hyperbaric oxygenation, and neurotrophic medicine including intravenous ganglioside GM1, Vitamins B12, B1, and B6, huperzine-A tablets, and Oxiracetam capsules, the patient’s symptoms were mostly resolved, with an MMSE score of 26 on discharge. 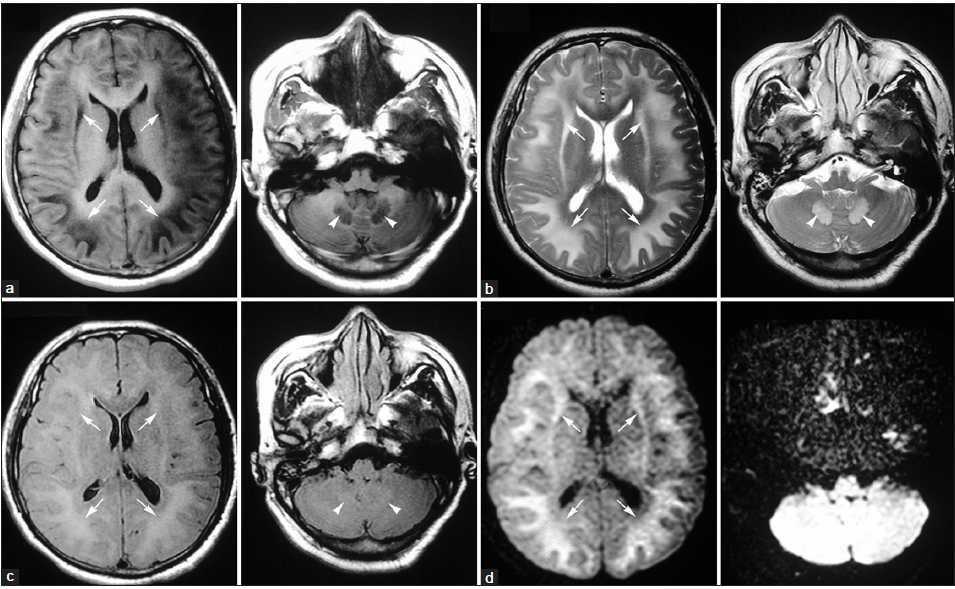 As a common component of experimental organic solvents and industrial products such as glues, inks, paints, and paint thinners, toluene is a ubiquitous solvent. The number of people suffering from medical conditions caused by toluene exposure is growing rapidly, particularly among early adolescents experimenting with volatile substances or inhalants and workers in developing countries who lack occupational protection. After inhalation, toluene is quickly absorbed by the lungs, then enters the brain due to its high lipophilicity and accumulates. Following metabolization in the liver, it is excreted by the kidneys mostly in the form of hippuric acid.[2] Chronic toluene inhalation primarily damages the central nervous system (CNS), especially the white matter, and causes toluene-induced leukoencephalopathy and psychosis.[2-4] Although cognitive impairment is the most prominent symptom, additional clinical manifestations may differ depending on the brain regions that are affected, including ataxia, tremors, psychiatric disorders, Parkinson’s disease, and temporal lobe epilepsy.[5] The diagnosis of toluene-induced leukoencephalopathy is primarily based upon the history of contact with toluene, clinical manifestations caused by damage to the nervous system, and exclusion of other medical conditions with similar symptoms. Neuroimaging and medical history are crucial to the diagnosis of toluene-induced leukoencephalopathy, as opposed to other types of encephalopathy such as heroin-related encephalopathy or hypoxic-ischemic encephalopathy.

Several studies have focused on the characteristic features of toluene-induced leukoencephalopathy detectable by neuroimaging. It has been reported that in chronic toluene abusers, MRI often reveals diffuse atrophy of the cerebrum, cerebellum, and brainstem (also discernible with computed tomography), increased periventricular white matter signal on T2-weighted images, and loss of gray matter-white matter differentiation across the cortex. The severity of these abnormalities is considered to be associated with the duration of abuse and concentration of toluene.[2,5] In this case, MRI shows a characteristic “sunflower-like” change and abnormal signal in the cerebellar dentate nuclei [Figure 1], which can be explained by the lipid-dependent distribution of toluene within the CNS and its resulting neuropathology.[1,2,6] Unfortunately, follow-up cranial images were not available for this patient, but according to a previous study, no significant improvement was found in the cranial MRI of a chronic toluene abuser following 5 months of abstinence.[7]

Previous neuropathological studies have reported that the brains of chronic toluene abusers show thinning of the corpus callosum and prominent pathology in the periventricular regions. Microscopically, diffuse and ill-defined myelin pallor is seen in cerebral and cerebellar white matter, along with evidence of neuronal loss in the cerebral cortex, basal ganglia, and cerebellum, intense, reactive gliosis, and giant axonal degeneration in the long tracts of the spinal cord.[1,2,6] The degree of myelin and axonal loss is considered to be associated with the extent of exposure, age of onset of toluene abuse, concurrent abuse of other substances, and polymorphisms in the gene encoding the enzyme aldehyde dehydrogenase, which is the main hepatic enzyme responsible for metabolizing toluene.

Although not fully understood, impairment of NMDA, GABA receptor signaling, and mitochondrial function may be involved in the mechanism of toluene-induced leukoencephalopathy.[8,9] Damage to white matter caused by toluene appears to be irreversible, and no treatment is currently known other than abstinence or general neurotrophic compounds. Melatonin was recently reported to reverse the reduction in dendritic branching in animals exposed to toluene, which might be a promising treatment for toluene-induced leukoencephalopathy.[10] Further studies are needed in order to develop more effective therapeutic strategies for this disease.

This study was supported by Army Health Care Project (13BJZ31).