Involvement of small and medium sized vessels of the intracranial vasculature is well recognised in tuberculosis. Large artery involvement is however a rare manifestation of tuberculous vasculitis. Here, we present the first reported case in the literature of a patient who presented with a malignant middle- cerebral artery (MCA) territory infarct as a manifestation of tuberculous vasculitis.

A 39-year-old female had presented to her general practitioner 15 days prior to this admission with a history of cough with expectoration and fever. Sputum stained with Ziehl-Neelsen stain revealed the acid fast bacilli morphologically characteristic of mycobacterium tuberculosis. A few days prior to this admission, she had had an episode of generalized tonic-clonic seizure followed by progressive decline in sensorium. Cranial magnetic resonance imaging (MRI) [Figure 1a-c] done at the referring hospital revealed multiple heterogeneously enhancing nodular lesions of varying sizes involving right posterior parietooccipital and frontal subcortical and cortical regions with significant thickening of adjacent leptomeninges and exudates. These features were classical of focal cortical and subcortical tuberculomata with cerebritis and leptomeningitis, especially on a background of acid-fast bacilli detected in sputum. There was also cerebral edema with effacement of the ventricular system, sulci and cisterns and focal vasogenic edema around the right parieto-occipital lesion with patchy areas of diffusion restriction representing arteritis-induced-infarcts. Antituberculous drugs (isoniazid 300 mg/day, rifampicin 600 mg/day, pyrazinamide 1,500 mg/day and ethambutol 800 mg/day), dexamethasone 8 mg twice a day and phenytoin (300 mg/day) were administered. Sensorium had however gradually deteriorated, and she had become unresponsive since a day when she was transferred to our hospital.

On examination, she was hemodynamically stable, pyrexial and anemic. Neurologically she was comatose with decerebrate movements of right upper limb to pain. There were no meningeal signs. On the oculocephalic maneuver, there was failure of adduction of right eye and upgaze was absent. Pupils were 5 mm on the right side and 2 mm on the left side. Optic fundi were unremarkable. Tendon reflexes were brisk bilaterally, and plantars were extensors on both sides. Investigations revealed: hemoglobin 12.9 g/dL; total white cell count 14.8 × 109/L; differential count-polymorphs 84%, lymphocytes 13%, myelocytes 1% and stab forms 2%; platelet count 19.0 × 109/L and erythrocyte sedimentation rate 29 mm/h. A whole list of investigations including blood sugar, renal and liver functions, electrolytes, coagulation profile, urinalysis, human immunodeficiency virus test, antinuclear antibodies, ds-DNA, rheumatoid factor, venereal disease research laboratory, hepatitis B surface antigen, C-reactive protein, antineutophil cytoplasmic antibodies, lupus anticoagulant and antiphospholipid antibody tests were noncontributory. Cranial enhanced computed tomography scan [Figure 1d] revealed an acute nonhemorrhagic complete right MCA territory infarct and few enhancing lesions in and around the sulci in the right occipital, posterior parietal and high frontal lobes with severe right ventricular compression. Marked cerebral edema and midline shift were observed. Decompressive surgery in the form of right fronto-parieto-temporal craniectomy was done as for malignant MCA infarct. Histopathological evaluation of leptomeningeal tissue obtained during surgery revealed features of chronic meningitis with dense lymphohistiocytic infiltrate forming microgranuloma surrounding the meningeal blood vessels. Clinically she deteriorated with bilateral pupillary dilatation on day 3 of admission with hypotension. She, unfortunately, succumbed to the illness on day 4 of admission. 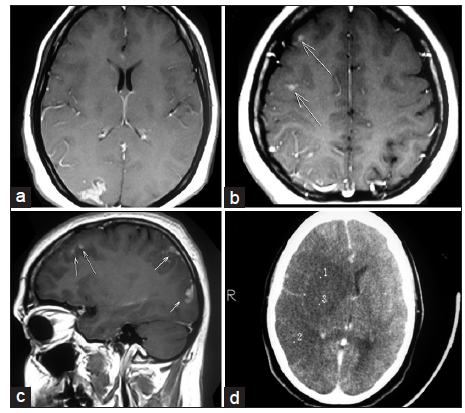 Tuberculous vasculitis is an important cause of stroke in the young in developing countries. Stroke in tuberculous meningitis occurs in 15-57% of patients especially in advanced stage and severe illness and are usually multiple, bilateral and located in the basal ganglia, especially the tubercular zone, which comprises of the caudate, anterior thalamus, anterior limb and genu of the internal capsule. Cortical stroke can also occur due to the involvement of the proximal portion of the middle, anterior and posterior cerebral arteries, as well as the supraclinoid portion of the internal carotid and basilar arteries.[1] While pathological changes suggestive of intracranial vasculitis are common in tuberculosis even without corresponding clinical features, to our knowledge, this is the first reported case of malignant MCA territory infarct in tuberculous meningitis. The initial MRI features [Figure 1a-c] were fairly typical of tuberculosis, especially in the context of positive acid-fast bacilli in the sputum. In a pathological study of 23 postmortem cases of tuberculous meningitis, phlebitis was found in 22 and arteritis of varying degrees in 20. Thrombosis in the territory of MCA with infarction was seen in one of these patients. Both hemorrhagic and nonhemorrhagic infarcts were visualized.[2] Tuberculous vasculitis usually involves vessels that traverse the basal exudates or are located within the brain parenchyma.[3] Arteries running through the subarachnoid space may show obliterative endarteritis with inflammatory infiltrates in their walls and marked intimal thickening.[4] Various stroke syndromes are known with involvement of different regions of the brain including basal ganglia, thalamus, cerebral hemispheres and cerebellum with varying outcomes.[5,6] In our patient, the infarct was extensive with significant mass effect and transtentorial coning. The neuro-ophthalomological findings noted were suggestive of midbrain involvement (right pupillary mydriasis, right medial rectus involvement and paralysis of upgaze). The course of the disease was rapid and malignant despite antitubercular and steroid therapy.

Elective hemicraniectomy has been advocated as a life- saving therapeutic option in patients with complete MCA infarction.[7] Young age, involvement of the nondominant hemisphere and progressively worsening neurological status despite aggressive medical therapy warranted consideration of the surgical procedure. However, we were unsuccessful as the patient deteriorated and died despite aggressive treatment. Clinical deterioration despite surgery is well known to occur in malignant cerebral infarction.

In conclusion, we report a patient with malignant MCA infarct as a consequence of tuberculosis. Such a manifestation may portend a poor prognosis despite aggressive life-saving measures.

We acknowledge Dr. Krishnan Swaminathan, Consultant Endocrinologist, Apollo Speciality Hospitals, Madurai, who read the manuscript, edited it and guided us in the finalization of the manuscript.