Primary non-Hodgkin lymphoma of the cranial vault with extra and intracranial extension in a nonimmunocompromised patient is extremely uncommon. Until date, only limited number of such cases has been reported in the literature and none was the lesion located as a diffuse swelling in the forehead. Imaging of the present case showed in a homogenous contrast enhancement mass involving the scalp of bifrontal supraorbital compartment and intracranial extra axial extension through the frontal bone with extension to the right orbit and right ethmoidal sinus. The intracranial mass was excised along with involved dura. Histopathology of the mass showed diffuse large B-cell non-Hodgkin lymphoma.

Primary cerebral non-Hodgkin lymphoma (NHL) is a rare group of neoplasm and are mostly intraaxial with frequent invasion of pachy and leptomeninges.[1] Primary malignant lymphoma arising from skull vault or scalp without involvement of the cerebral parenchyma and systemic or skeletal manifestation is also rare. Only few cases have been reported in the literature.[2-4] Involvement of bone is commonly seen with secondary NHL including that of the scalp.[1] NHL originating primarily in the skeletal location is seen only up to 4% of cases. Initial involvement of the skull is extremely rare at presentation, and primary cranial vault lymphoma constitutes only 0.2% of lymphoma cases.[5] However, primary NHL arising only in the cranial vault or scalp without involving the cerebral parenchyma or without systemic involvement is extremely rare. Here, we are reporting this case because of its rare occurrence.

A 37-year-old male patient was admitted from our outpatient department with a history of a progressively growing painless scalp swelling over the frontal region for 2 years, headache for 1 year. He had progressive loss of vision for 8 months and behavioral changes for the last 6 months. He had no past history of fever and head injury. He was normotensive and nondiabetic. The clinical examination revealed a firm and well-defined nontender immovable solitary subcutaneous swelling, measuring 10 cm × 8 cm without any bruit or pulsation in the frontal region [Figure 1]. He had no lymphadenopathy or hepatosplenomegaly. Physical examination of other systems was normal. On ocular examination, visual acuity in both eyes was of no perception of light. Fundoscopy revealed bilateral atrophic papilledema. Hematological examination showed hemoglobin level of 11.0 g/dL, white blood cell count of 5,840/mm3 with a normal differential and platelet count of 234,000/mm3. Blood biochemistry was also normal. Antihuman immunodeficiency virus antibody was negative. Magnetic resonance imaging (MRI) of the head showed a fairly large mass with mixed signal intensity of the skull vault within homogenous contrast enhancement involving the scalp of bifrontal supraorbital compartment. The mass was extending into the right orbit and right ethmoidal sinus through its anterosuperior part [Figure 2]. However muscle cone, eyeball and optic nerves were not involved. Left orbit and left ethmoid was not involved. The mass was located within diploe of the frontal bone with intracranial extension through frontal bone with extraaxial extension into bifrontal compartment. The frontal lobes were displaced posteriorly, and there was reactive edema in both frontal lobes. Contrast- enhanced computed tomography of the neck, chest, abdomen and pelvis was normal. 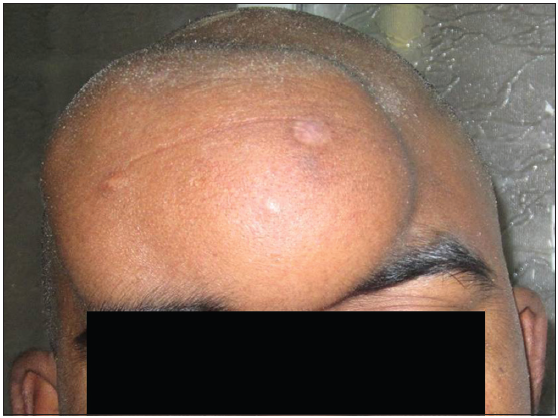 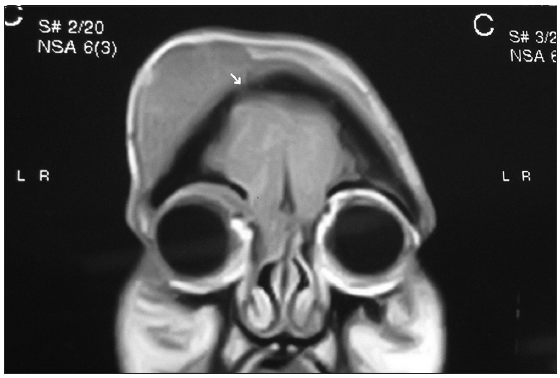 Figure 2. Magnetic resonance imaging of the brain showing a fairly large mass with mixed signal intensity involving the scalp of bifrontal supraorbital compartment with extension into the right orbit and right ethmoidal sinus through its anterosuperior part (marked with a white arrow)

The patient underwent surgery after other preoperative investigations were completed. Bicoronal skin incision was made, and skin flap was dissected off the frontal extracranial mass which was then excised. The frontal bone was found to be moth eaten, and bifrontal craniectomy of the involved bone was performed. The intracranial portion of the mass was found to be extraaxial with involvement of the underlying dura. The intracranial mass was excised along with involved dura; however, there was no involvement of underlying cortex. The mass along with the involved bone and dura were sent for histopathological examination. 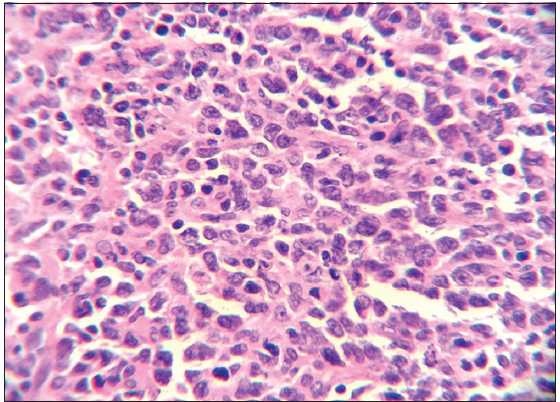 Figure 3. Mature nonneoplastic lymphocytes admixed with atypical lymphoid population of cells, latter having abundant cytoplasm, round to convoluted nuclei with prominent nucleoli (HE, ×400)

After receiving the histopathology and immuno- histochemistry report lumbar puncture and bone marrow biopsy, was performed to prove that was negative for lymphoma cells.

The patient was referred to Oncology Department for radio- and chemotherapy. Whole brain was irradiated with 45 Gy in 25 fractions, involving field irradiation with 10.8 Gy in 6 fractions over 35 days. After completion of radiotherapy, he was treated with 4 cycles of systemic chemotherapy (rituximab + cyclophosphamide, doxorubicin, vincristine, and prednisolone). He was administered 500 mg/m2 of rituximab on day 1 and 750 mg/m2 of cyclophosphamide, 50 mg/m2 of doxorubicin, 2 mg/m2 of vincristine on day 2 and oral 100 mg tab of prednisolone on 1-5 days. The cycles were repeated after 3 weeks.

Physical examination of the patient, complete hemogram test and serum lactate dehydrogenase level was followed-up at 2 months interval for 1 year. MRI was repeated at 6 months interval. After 12 months of follow-up, no signs of recurrence have been observed.

Primary lymphoma of the skull vault is extremely rare neoplasm and NHL originating in bone has been reported in only 4% of cases, which is typically seen in femur, tibia, pelvis, spine mandible, and scapula.[1,6] Skull vault lymphoma needs special attention from other bony lymphomas because the cerebral structures may get involved by direct invasion. Usually these are intraaxial with pachy- and leptomeningeal involvement being frequent. True primary malignant lymphoma of the bone is defined as a solitary mass lesion without any evidence of disease at another site and no systemic dissemination within 6 months of tumor detection.[7,8] The present case thus fulfills the criteria for primary malignant lymphoma of bone. Primary cranial vault lymphomas have been reported in immunocompromised or trauma patients;[9,10] however primary NHL of the cranial vault with extra- and intra-cranial extension without systemic or skeletal manifestation in a nonimmunocompromised or nontraumatic is extremely uncommon.[4] Only 19 cases have been reported in the literature out of which six cases had tumor localization in the frontal region.[11] The incidence of lymphomas in the central nervous system are increasing nowadays due to the increasing incidence of immunocompromised patients. Primary malignant lymphomas involving only the cranial vault and scalp without any systemic or cerebral parenchymal involvement is rare, and only a few cases have been reported in the literature.[5-9] The initial symptoms and signs of cranial vault lymphoma include a painless lump in the scalp, headache because of bone destruction or tumor infiltration of meninges and focal neurological deficits secondary to tumor infiltration of the cerebral cortex.[11] Lymphoma cells may infiltrate the spaces within the diploe and along the emissary veins extend to infiltrate the soft tissues on either side of the bone. Malignant lymphomas of the skull bone may present with bony changes at first and by infiltration may lead to complete destruction of the skull. In our case, there was destruction of frontal bone and tumor mass infiltrated the underlying dura. Furthermore, there was no focal neurological deficit, and postoperative cerebrospinal fluid cytology was negative for lymphoma cells. Involvement of the meninges has been speculated due to the extension through the diploic spaces along the emissary veins and nerves that pass through the dura to the leptomeninges.[12] Being rare only a high index of suspicion can diagnose these cases prior to histopathology.

The incidence of large cell lymphomas reported in the literature is approximately 4.68 cases/100,000 persons per year.[3,10,11] These tumors may extend into the brain or the scalp mimicking a meningioma.[4] Most of these reported cases were in the age group of 50s and 60s whereas age of our patient was only 37 years.

Differential diagnosis of cranial vault NHL with intra and extracranial extensions include metastatic or primary skull tumors and intraosseous meningioma. There is widespread cortical destruction in these cases, while little cortical destruction is noted in lymphomas. Total surgical excision is rarely possible in lymphomas and treatment of these tumors is surgical removal, followed by radiotherapy and chemotherapy. Treatment with irradiation and corticosteroids often produces a partial response. Therefore, tumor recurs in > 90% of patients. Median survival is 10-18 months in immunocompetent patients and less in immunocompromised patients.[13-16] In our case, there was no sign of recurrence after 12 months of follow-up. 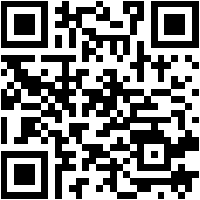