Non-albicans candida meningitis is a relatively rare disease, with nonspecific clinical manifestation, which makes the misdiagnosis occur sometimes, especially in the early stage of the disease. Abuse of broad-spectrum antibiotics, corticosteroids, central vein cannulas, senility, big operation, malignancy, and total parenteral alimentation were all the susceptible factors of non-albicans candida infection. We present a case of this type of non-albicans infection in a 42-year-old woman who was early misdiagnosed as tuberculous meningitis and was treated with antibiotics and antituberculosis agents. The diagnosis of non-albicans infection was confirmed by fungus culture of the cerebrospinal fluid (CSF) with a low detectable rate. This case reminds us that the non-albicans candida meningitis had a nonspecific clinical presentations and laboratory data, and was difficult to differentiate from tuberculosis meningitis. Hence, we should highly suspect this disease if central nervous system infections with uncertain pathogens. Test cell counts; protein and fungus culture of CSF should be used to confirm the diagnosis. Once the diagnosis was established, the patients should receive antifungal treatment based on drug sensitivity tests as early as possible.

Central nervous system (CNS) infection caused by candida is a type of systemic candidiasis.[1] It is rare in clinical practice, with unnspecific clinical features and laboratory data, which makes this disorder prone to misdiagnosis. The morbidity of non-albicans candida infection rises in recent years as the abuse of broad-spectrum antibiotics and corticosteroids, human immunodeficiency virus (HIV) infections, and so on. Here, we present candidal meningitis case mimics tuberculous meningitis in a chronic hepatitis B patient.

A 42-year-old female, farmer was admitted in the Neurology Department of our hospital on November 24th, 2009. Two months earlier, she had a sharp, intermittent occipital headache and fever, the temperature fluctuated between 37.5 °C and 38.5 °C and up to 40 °C sometimes, it increased at dusk and night, accompanied with nonprojectile vomiting occasionally and anorexia with no visual blurring, diplopia, preceding trauma, or history of migraine. The fever and headache continued for 2 months. Painless intumescent lymph nodes showed up in the neck 2 months later, and the patient was diagnosed as tuberculous infection. And treated with antibiotics and antituberculosis drugs in local hospitals, but the symptoms were not relieved. So she came to our hospital for further diagnosis and treatments. Physical examination revealed an ill-looking woman with yellow skin, white conjunctiva, and enlarged cervical lymph nodes. The neurological examination showed neck stiffness, positive Kernig’s sign, and negative Babinski sign on both sides. 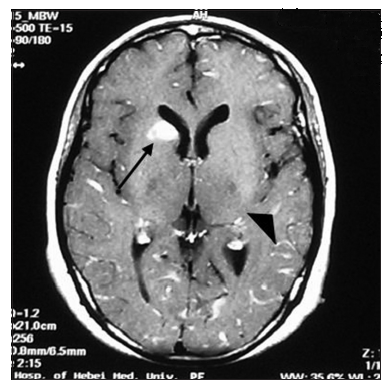 Cervical lymph node biopsy [Figure 2] showed mycotic lymphadenitis. There were a lot of granulomatosis-like structures and mold in macrophages. Lymph node puncture fluid smears [Figure 3] showed that hyphae were visible. CSF smears showed no fungus. CSF and lymph node puncture fluid cultures [Figure 4] we saw blastoconidia with India ink staining, and not saw capsule in the culture. Non-albicans candida was considered as a pathogen, and the diagnosis was clear as systemic non-albicans candida infections mainly presented as non-albicans candidal meningitis. She received amphotericin B 1 mg/day and fluconazole 400 mg/day intravenously as soon as diagnosis is clear. Unfortunately, the patient discharged from the hospital on the second day since administration of antifungal drugs because of economic reasons and hence we could not observe the therapeutic effect. 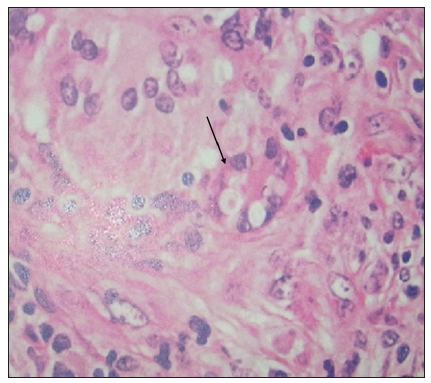 Figure 2. Cervical lymph node biopsy showed mycotic lymphadenitis (arrow). There were a lot of granulomatosis-like structures and mold in macrophages 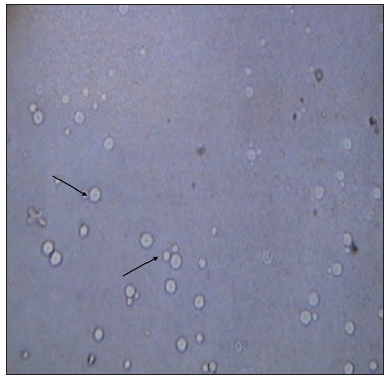 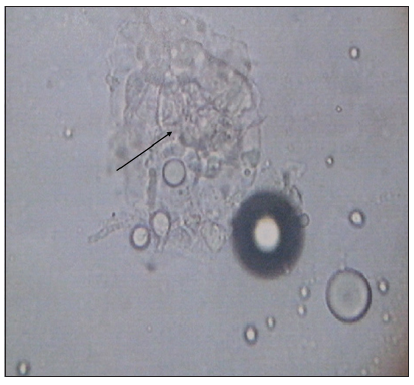 Many strains of fungal can cause CNS infection. Aspergillus, mucor, cryptococcosis, and yeast are the most common strains in China.[2] A foreign research showed that yeast, aspergillus, and cryptococcosis was the most common fungal pathogens for CNS infection in immune-competent hosts, while aspergillus, candida and nocardia were the most common pathogens in patients with impaired immunity.[3-5] Many factors contributed to the increasing incidence of systemic candidiasis, such as HIV transmission, the using of hormonal, immunosuppressive agents and broad-spectrum antibiotics, organ transplantation, the invasive intracranial examination, and so on. This patient has an infection of hepatitis B virus, and uncertained cholangio carcinoma. Her immune system was weak, such kind of patients should be considered of rare bacterial or fungus infection at the initial of treatment. Therefore, fungi, and bacterial culture could be done more actively.

Candida albicans was the most common pathogen of candidiasis in the past,[6] and the proportion of nonblastomyces albicans infection has tended to rise recently. However, meningitis caused by non-albicans candida is rare in the clinic and does not have specific manifestations, which make the misdiagnosis occur sometimes, especially in the early stage of the disease. This case reminds us that candidiasis should be considered if we found patients had unexplained fever responded poorly to antibiotics, thrush, esophagitis, vaginitis, atypical lung infiltrates, unexplained liver dysfunction, mental abnormality, endoophthalmitis, dry cough, rash, and tender muscle.[7] Candida is a kind of mold and belongs to Saccharomyces. It includes two types-yeast type and pseudohyphae type. Yeast type was round or oval and can produce blastoconidia. Monilia albicans, candida parapsilosis, candida tropicalis, candida glabrata, monilia guilliermondii, candida lusitaniae, and candida krusei are the most common candida albicans that can infect humans. In America and other European countries, candida parapsilosis and candida krusei are the major pathogens of non-albicans candida infection.[8] These fungus are resistant to the most common antifungal drugs, which makes them more likely to be opportunistic infections. The situation is more or less similar in China and Brazil.[9]

We summarize, the clinical features of this patient: (1) a 42-year-old woman, acute onset of fever, which is resistant to the antibiotics and antituberculosis agents; (2) liver dysfunction, intra-liver lesion, biliary ducts dilation; (3) hilar and portal hepatis lymph nodes enlargement; (4) used of broad-spectrum antibiotics in the early stage of the disease when the diagnosis was unclear; (5) with a low immune state, which was the basis of opportunistic infections. We considered the case was blastomycosis according to the lymph node biopsy results. Morphologically, giant blastoconidia presented a spectrum of forms such as blastoconidia with linear creases, with single broad-based buds resembling Blastomyces dermatididis, with multiple buds resembling Paracoccidioides brasiliensis. Its forms varied along with the environment and temperature. Such as, after growth on commercially prepared cultures in room temperature, we can see white fluffy colonmold to naked eyes and the characteristic thick-walled broad-based yeast in microscope with Periodic acid Schiff staining, as it shows mycelia-like type, while been cultured in 37 °C it presents on brown and frilly yeast-like colony, and in tissue it shows yeast-like type. Candida includes yeast type and pseudohyphae type and produces blastoconidium. In this case, we can see blastoconidia only with India ink staining in CSF and lymph node puncture fluid culture. Brain biopsy hadn’t been done. Combing with the manifestation, brain MRI, CSF tests, and fungus culture results, we highly suspected systematic candidal albicans infection. This case reminds us that it is essential to do CSF culture for patients with unexplained CNS infection, not only the routine CSF cell counts and protein tests. If the diagnosis is established, patients should receive antifungal treatment based on drug sensitivity test as early as possible. 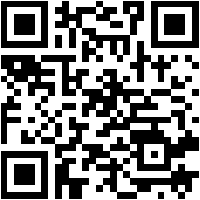