Encephalitis associated with antibodies to gamma-aminobutyric-acid B (GABA-B) is a subgroup of autoimmune synaptic encephalitis with typical features of limbic encephalitis and small cell lung cancer (SCLC). We report a case of anti-GABA-B receptor encephalitis in a 57-year-old man who presented with seizures, memory loss, and abnormal behavior. He developed partially neurological responses to immunotherapy, but refused comprehensive tumor screening. The symptoms were aggravated again 4 months later. Workup showed antibodies to GABA-B receptors and tumor screening revealed SCLC. It highlights the importance of early screening of underlying tumor and anti-tumor treatment in paraneoplastic cases.

Encephalitis associated with antibodies to gamma-aminobutyric-acid B (GABA-B) receptors has been recognized as a subgroup of autoimmune synaptic encephalitis recently.[1] It has been demonstrated that GABA-B receptors were engaged during rhythmic activity in the hippocampus and sculpted this activity.[2] Correspondingly, anti-GABA-B encephalitis mostly presents with symptoms of limbic encephalitis (LE), which was characterized by memory loss, confusion, hallucinations, personality changes, and seizures. The GABA-B receptors are also distributed in the cerebral cortex, thalamic nuclei, cerebellum, and amygdala.[3] The initial symptom presentation of cerebellum or brain stem were thus reported in some patients, such as rotational vertigo, ataxia, and opsoclonus.[4,5]

In nearly half of patients with anti-GABA-B encephalitis, the immune response occurs as a paraneoplastic event, most of which were small cell lung cancer (SCLC). Here, we report a case of a 57-year-old man who presented with typical symptoms of LE and was finally found SCLC 5 months after onset.

Clinical symptoms and images information before and after treatment 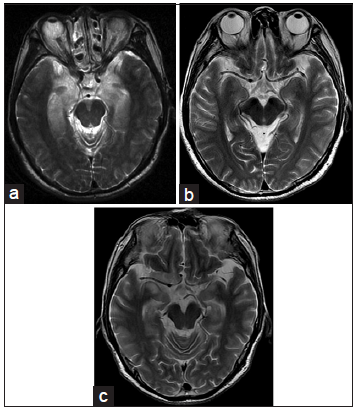 The seizure was controlled after the administration of valproic acid (500 mg/day) and immunomodulating therapy with 40 mg of methylprednisolone on admission. A repeated brain MRI was performed on day 20 and revealed even severer bilateral fluid-attenuated inversion recovery (FLAIR) and T2 hyperintensity in the medial temporal lobe. Therefore, intravenous immunoglobulins (IVIg) (400 mg/kg/day) was administered for 5 days on day 20. The patient developed significant improvement of limbic dysfunction during the IVIg therapy. Although no occupying lesion was found in lung, we suggested further tumor screening including biopsy of mediastinal lymph nodes and fluorodeoxyglucose positron emission tomography. However, the patient refused further extensive screen for underlying tumor and was discharged 25 days after admission, with full recovery of behavior and mental status, and partially improvement of memory impairment. One month after discharge, the follow-up brain MRI showed the lesion in remission [Figure 1].

The misdiagnosis rate of anti-GABA-B receptor encephalitis is high since autoantibodies tests were still not popularized in many countries. Most recently, case serials of patients with anti-GABA-B receptor encephalitis emphasized the typical triad of clinical presentation, including memory alternation, seizures, and SCLC.[6] There are numbers of SCLC-associated onconeural antibodies, including Hu, amphiphysin, and collapsin response-mediator protein (CV2). Anti-GABA-B receptor antibodies may be detected in patients with LE associated with SCLC who are seronegative for other onconeural antibodies.[7] The mechanism of SCLC-associated autoimmune responses remains to be elucidated. It may be related to abnormal self-antigen expression in tumor cells, or the antigenic protein might be mutated or modified to those foreign to the immune system. Neurological symptoms often present before the cancer becomes symptomatic, suggesting the importance of early detection and diagnosis of SCLC. The paraneoplastic cases with anti-GABA-B encephalitis, particularly SCLC, presented at an older age range from 53 to 75 years old, and had male predominance.[1,4] Paraneoplastic cases seemed to have higher titers antibodies, mostly higher than 1:100 (IgG) in CSF.[1,4,8]

The neuroimaging characteristics of anti-GABA-B encephalitis were nonspecific, nearly half of which might present unilateral or bilateral FLAIR and T2 hyperintensity in the medial temporal lobe, sometimes in cerebellum or brain stem which corresponded to the symptoms. Previous reports found that the severity of clinical symptoms was not associated with the lesion size on brain image, nor was the presence or absence of underlying tumors.[1]

Regardless of being paraneoplastic or not, most of the patients developed substantial or full neurological responses to immunotherapy, including steroids, IVIg, and plasma exchange. In paraneoplastic cases, however, patients might achieve neurological improvement with successful anti-tumor treatments even without immunotherapy.[4] In addition, the duration of disease and clinical outcomes varied depending on the presence or absence of SCLC. In our case, the clinical and neuroimaging characteristics recurred without detection and treatment of SCLC, which emphasized the importance of early identification of underlying tumors.

In conclusion, anti-GABA-B receptor encephalitis is a potentially treatable disorder that should be diagnosed by autoantibodies tests. Aggressive immunotherapy is often effective, but anti-tumor therapy is also pivotal for the neurological recovery and long-term outcomes of patients with the paraneoplastic event. This case report joined to the previously reported description of this paraneoplastic syndrome,[1,4] to delineate the importance of early diagnosis for the prognosis and management. 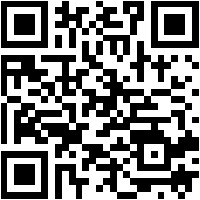