Scleromyxedema is a rare dermatologic disorder, characterized by erythematous or yellowish lichenoid waxy papules. Neurological manifestations are rare but well-recognized. A 51-year-old woman, diagnosed with scleromyxedema, was admitted to the hospital with status epilepticus, caused by brain lesions, as disclosed in a brain magnetic resonance imaging (MRI). The patient was treated with anticonvulsants and corticosteroids and gradually recovered fully. A complete remission of the lesions was shown in a follow-up brain MRI. In cases with scleromyxedema and the presence of neurological manifestations, we need to pay attention to central nervous system involvement, especially when combined with brain MRI lesions, and treat the patient appropriately.

Scleromyxedema is a rare dermatologic disorder, characterized by erythematous or yellowish lichenoid waxy papules. Neurological manifestations are rare but well-recognized in patients with scleromyxedema, among other extracutaneous complications.[1-4]

We report a patient with scleromyxedema presenting with refractory status epilepticus, caused by brain lesions, probably related to the disease.

A 51-year-old right handed Caucasian woman was admitted to the hospital with subacute onset of confusion, slurred speech and expressive aphasia that had developed in a period of 3 days. The patient had been diagnosed with scleromyxedema for 15 years and had been under regular follow up and monthly administration of immunoglobulin. Her general physical examination at admission showed changes in the cutaneous presentation of her scleromyxedema. This patient presented with diffuse confluent papulosquamous eruption and thickening of the skin on the face, body, arms and the legs with impaired joint mobility of her fingers, perhaps as a consequence of the skin thickening associated with her scleromyxedema. With regard to the neurological manifestations, aphasia and bilateral pyramidal weakness were found.

The patient became rapidly disorientated and developed generalized tonic-clonic seizures leading to convulsive status epilepticus. Intravenous diazepam and phenytoin (according to status epilepticus treatment protocol) was administered and status epilepticus was not resolved and general anesthesia and intubation in the intensive care unit was required to achieve seizures control. 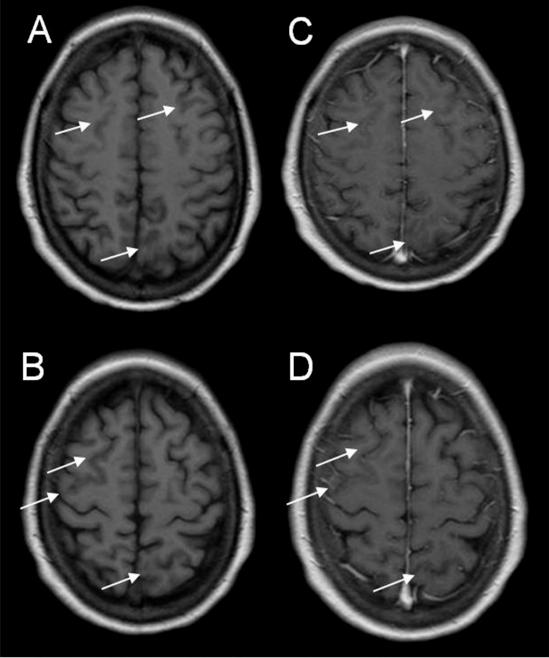 The patient remained under general anesthesia for 48 h. Electroencephalogram after this 48 h-period showed that status epilepticus was resolved and demonstrated spikes followed by slow waves, over the left fronto-parietal region. The patient was transferred to the department of neurology under treatment with levetiracetam and corticosteroids (40 mg of dexamethasone). She demonstrated a gradual recovery and over the following week her language and motor function improved dramatically and the dosing of corticosteroids were reduced with decrements of 10 mg every 3 days.

The patient was discharged, after 25 days of hospitalization, without any neurological semiology. The follow up brain MRI one month later demonstrated almost complete remission of signal abnormalities [Figure 3]. The anticonvulsant treatment was tapered of (redcued) over a three month period without any further seizure occurrence. 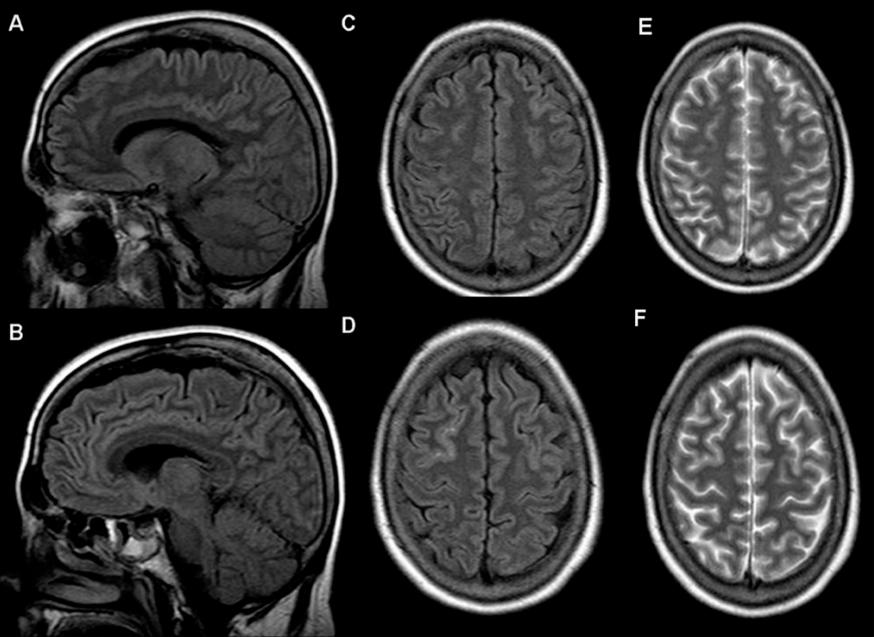 Scleromyxedema also known as lichen myxedematosus or papular mucinosis is a rare skin disorder involving the face and the extremities that is characterized by erythematous or yellowish lichenoid waxy papules.[1,2] The pathogenesis of scleromyxedema remains unclear.[5] A proliferation of fibroblasts, deposition of acid mucopolysaccharides in the upper dermis and a monoclonal paraproteinemia-most often IgG monoclonal gammopathy are the predominant findings.[2,5] Extracutaneous manifestations are due to cardiovascular, rheumatologic, renal, hematologic and neurologic involvement.[1-4] Encephalopathy, transient focal neurological disturbances, progressive cognitive decline, seizures, peripheral neuropathy, carpal tunnel syndrome and myopathy are included in the neurological manifestations.[2,4] They could be partially explained by the paraproteinemia and the disruption of the blood-brain barrier with elevated CSF protein concentration in the central nervous system (CNS) disorders or by the deposition of mucopolysaccharides within the nerve and muscle fibers in peripheral nervous system conditions.[2,3] The treatment of CNS involvement in scleromyxedema patients includes steroids, plasmapheresis, intravenous immunogloblin and chemotherapeutic drugs in various combinations.[4]

Brain imaging in patients with CNS involvement rarely shows lesions responsible for this condition and in the rare cases with lesions demonstrated, spontaneous remission remains unlikely.[2,4] In conclusion, in cases with scleromyxedema that present with neurological manifestations, we should consider central nervous system pathophysiology and evaluate possible bsrain abnormalities with detailed magnetic resonance images and treat the patient appropriately. 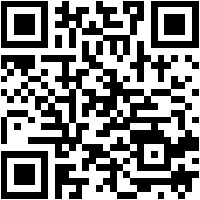