Concurrent occurrence of both intracranial and intramedullary tuberculomas

Tuberculosis involving spinal cord in the form of intramedullary tuberculoma is uncommon, and the concurrent occurrence of cranial and intramedullary tuberculomas is extremely rare. We report a case of disseminated tuberculoma involving brain and spinal cord with miliary tuberculosis in a 32-year-old male presenting with fever, cerebellar signs and motor weakness of both upper and lower extremities. Based on magnetic resonance imaging and polymerase chain reaction, we diagnosed as tuberculoma. He completely recovered with conventional antituberculous treatment and steroids. The follow-up of the patient showed disappearance of signs and symptoms.

Mycobacterium tuberculosis is a serious pathogen worldwide. Central nervous system (CNS) tuberculoma is a rare form of extrapulmonary tuberculosis and is often the result of hematogenous spread from a primary focus, mostly the lung.[1] Most common manifestations of tuberculosis in the CNS are tuberculous meningitis and intracranial tuberculoma. Brain is far more commonly affected than the spinal cord.[2] Infratentorial tuberculomas are more frequent in children, whereas lesions are mostly supratentorial in adults.[3] Intramedullary tuberculoma of the spine is a rare manifestation of disseminated tuberculosis, usually in young people and most commonly involve the thoracic spinal cord.[4] Its incidence is only 2 out of 100,000 cases of all tuberculosis.[5] We report a case of combination of intramedullary and intracranial tuberculoma which is extremely rare, so far, only five cases have been reported in the literature.

A 32-year-old male immunocompetent patient came with severe signs of unsteadiness of gait, swaying, slurred speech and heaviness in both upper and lower limbs for 10 days. There was also the history of the evening rise of temperature, loss of weight and appetite. On examination, he had quadriparesis with a power 4/5 in all four limbs, tremors, dysarthria, dysmetria, dyssynergia, dysdiadochokinesia, hypotonia in all limbs, plantar response was equivocal without sensory involvement.

Based on chest X-ray, MRI and PCR, the diagnosis of multiple tuberculomas was made. 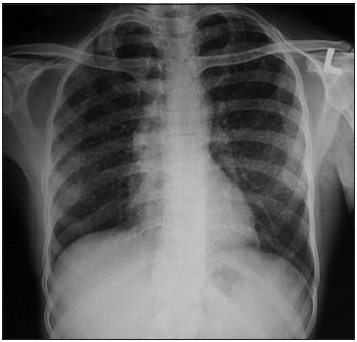 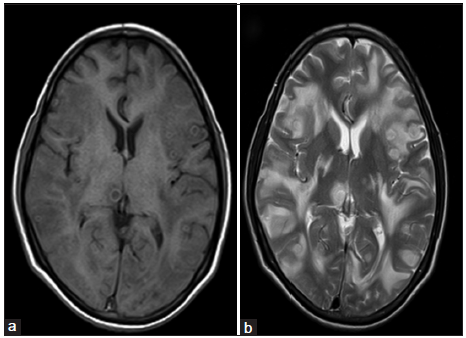 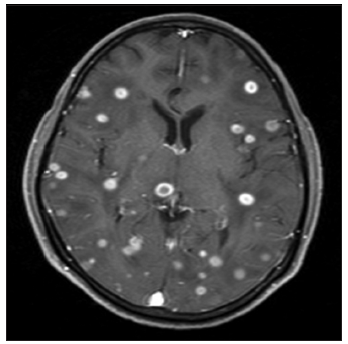 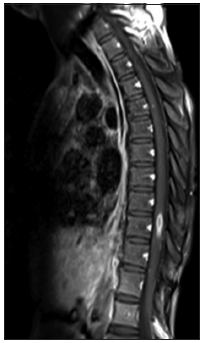 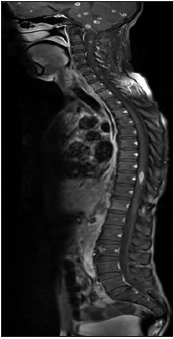 Tuberculoma is a peculiar manifestation of tuberculosis that might occur in any solid organ of the body. It is, usually, formed by conglomeration of several miliary tubercles, with the centre of the conglomeration becoming caseous. Caseous material gets inspissated and sometimes liquefied. A thick capsule may form around these lesions.[6] Concurrent occurrence of intracranial tuberculomas along with intramedullary spinal tuberculomas is extremely rare.[7,8]

The case presented here was diagnosed in the background of miliary tuberculosis. The chest X-ray of this patient showed miliary mottling. The patient had elevated ESR and was symptomatic in the form of loss of weight and appetite with occasional evening rise of temperature.

The differential diagnosis of tuberculomas includes granulomas such as cysticercal granulomas and neoplastic lesions such as astrocytoma, metastasis or lymphoma. In this case, the clinical presentation and size of the lesion combined with the classical ring enhancement and surrounding edema was thought to be typical of a tuberculous granuloma. Clinical improvement and resolution of the lesion in the brain as well as spinal cord as seen on the MRI [Figure 7] after the institution of 12 months (2 months intensive phase + 10 months of continuation phase) using anti-tuberculous treatment along with dexamethasone in intensive phase confirmed our diagnosis. 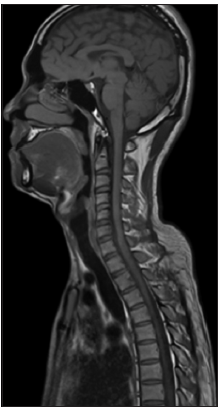 Figure 7. Magnetic resonance imaging of brain and spine reveal absence of the lesion and normal function

In conclusion, we report a case of concurrent occurrence of intramedullary and intracranial tuberculomas in a patient of military tuberculosis. This case is being presented because of extreme rarity. Medical therapy is generally advocated as the initial treatment.